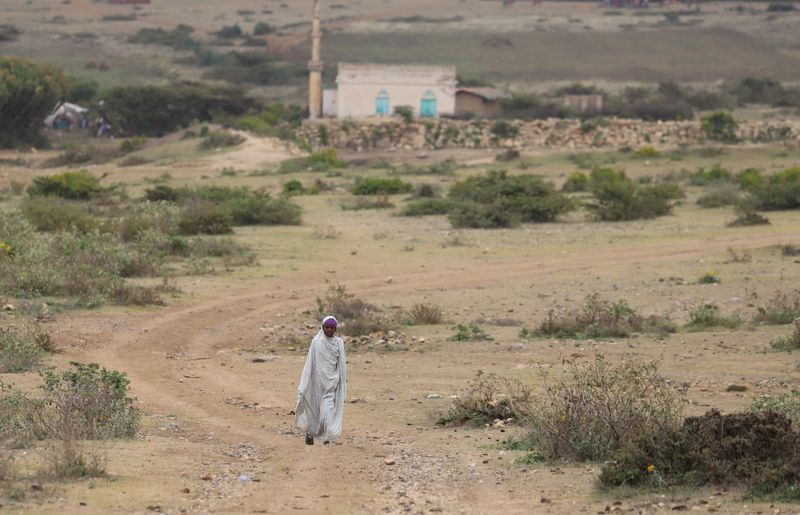 By Dawit Endeshaw and Giulia Paravicini

ADDIS ABABA (Reuters) -The local government in Ethiopia’s Somali region said on Tuesday militia from the neighbouring region of Afar had attacked and looted a town, the latest flare-up in a local boundary dispute that adds to broader tensions in the Horn of Africa nation.

Ali Bedel, spokesperson for the Somali region government, said Afar militia “massacred hundreds of civilians” on Saturday in Gedamaytu, also known as Gabraiisa, a town at the centre of long-running regional boundary dispute in northeast Ethiopia.

Afar’s government did not immediately respond to requests for comment. However, an internal U.N. report seen by Reuters said there was fighting in Gedamaytu with an unknown number of injured on both sides.

Ethiopia has been trying to contain a surge in violence as regions and ethnic groups vie for power and resources. The worst violence, unrelated to the latest flare-up, has been around Tigray in the north, where a conflict erupted in late 2020.

Ali Bedel, spokesperson for government of the Somali region, which stretches north to south along Ethiopia’s eastern border, said of the Gedamaytu incident: “Many have been displaced and the town is almost completely looted.”

Two senior Somali government officials gave similar accounts, with one saying there were hundreds of injured.

The internal U.N. security bulletin said on Monday there was “ongoing fighting” between Afaris and Somalis in Gedamaytu with an “unknown number of injuries” on both sides.

The Somali spokesperson said that after the attack “angry youths” had blocked a main road in the Afar area on Sunday and Monday that connects Addis Ababa, the capital of landlocked Ethiopia, and the sea port in next door Djibouti.

He did not say where the youths were from.

“The government are trying to calm down the situation,” he said, without giving further details.

In Addis Ababa on Tuesday, thousands of new recruits to Ethiopia’s federal army paraded before leaving for training camps, after Tigrayan forces advanced over the weekend into Amhara, a northwestern region that lies between Tigray and the capital further south.

In a fresh sign of the humanitarian crisis unfolding in Ethiopia as violence spirals, the U.N. refugee agency UNHCR said on Tuesday it was concerned about 24,000 Eritrean refugees in two camps in the Tigray region, saying they were cut off from aid and could run out of food and drinking water.

In addition, about 3,000 Ethiopians from Amhara crossed into Ethiopia’s neighbour Sudan on Monday, Sudan’s state-run SUNA news agency reported, saying it was the highest since fighting erupted in November between Tigray’s ruling party and Ethiopia’s government.

SUNA said those who crossed were from the Kimant, a minority group in the Amhara region.

Kefale Mamo, a representative of the Kimant Committee, which campaigns for Kimant self-determination in the nation made up multiple ethnic groups, told Reuters he had received reports of fighting between Ethiopian forces and Kimant farmers.

He said many homes were destroyed and cars stolen but said he could not give any casualty figures or details because communications in the area of fighting were down.

A spokesperson for the Amhara region referred queries to the federal government. Ethiopian government officials and the country’s military did not immediately respond to Reuters requests for comment.