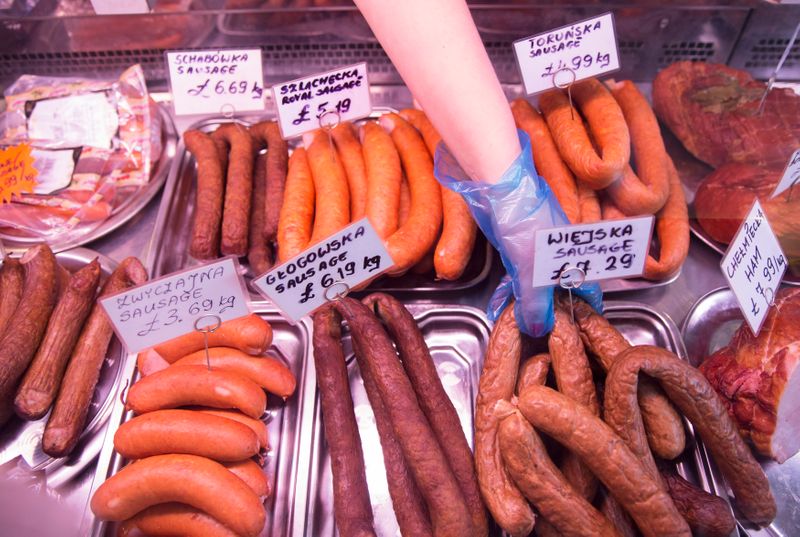 FILE PHOTO: A worker reaches for sausage at a Polish delicatessen in Grays in southern Britain December 11, 2015. REUTERS/Neil Hall

BRUSSELS (Reuters) -The European Union agreed on Wednesday to a ceasefire with the United Kingdom in a post-Brexit dispute dubbed the “sausage war” by extending a grace period for shipments of certain meat products from Britain to Northern Ireland.

The bloc will also make it easier for medicines and guide dogs to cross the Irish Sea and allow Northern Irish drivers to travel to Ireland with existing insurance documents, moves designed to ease tensions following Britain’s exit from the EU.

The grace period on chilled meat products was due to end on July 1, when British non-frozen sausages or mince would not have been able to cross the Irish Sea because of an EU ban on such products from third countries, which now include Britain.

London called for a three-month extension to allow the two sides to resolve the trade difficulties over Northern Ireland, which has faced disruption since Britain completed its exit from the EU at the end of 2020.

The European Commission said the three months should be final and used for supermarkets to establish different supplies of meat products or for Britain to accept an EU proposal to maintain aligned public, animal and plant health standards.

Commission vice president Maros Sefcovic said this Swiss-style agreement could see 80% of required checks on goods crossing the Irish Sea “disappear in a flash”, but it depended on the level of checks Britain wanted.

London has said a key part of Brexit is not to be bound to EU rules. Sefcovic said a deal could be temporary, such as until Britain sealed a trade agreement with the United States, or might be possible for a limited range of products.

“This continuous rolling over of the grace period doesn’t give the predictability and stability to businesses, especially in Northern Ireland,” he told a news conference.

Britain said the extension was a positive first step, but both sides still needed to agree a permanent solution.

The trading arrangement is governed by the Northern Ireland protocol, which has needed to find a delicate balance between keeping open the province’s border with EU member state Ireland to protect the 1998 Good Friday peace deal and stopping goods entering the EU’s single market unchecked across that frontier.

The protocol keeps Northern Ireland inside the single market for goods, but this requires controls on goods arriving from mainland Britain.

Britain’s Brexit minister David Frost said in a statement the protocol had to be operated in a pragmatic way.

“The chilled meats issue is only one of a very large number of problems with the way the protocol is currently operating,” he said, adding Britain would work “energetically” with the EU to find a solution.

The disruption to the delivery of some products has angered some pro-British unionists in Northern Ireland and there are fears it could fuel violence during “marching season” parades in July.