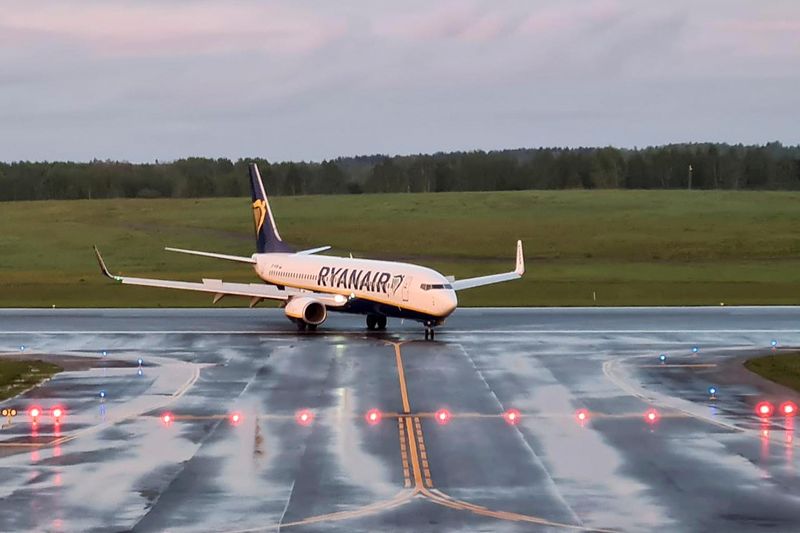 FILE PHOTO: A Ryanair aircraft, which was carrying Belarusian opposition blogger and activist Roman Protasevich and diverted to Belarus, where authorities detained him, lands at Vilnius Airport in Vilnius, Lithuania May 23, 2021. REUTERS/Andrius Sytas/File Photo

BRUSSELS (Reuters) – The European Union imposed sanctions across the Belarusian economy on Thursday in response to the forced landing of a Ryanair flight by Minsk to arrest a journalist on board last month, which Western leaders said was “state piracy.”

The new sanctions, which follow overflight bans on Belarusian aircraft, including bans on EU businesses from importing goods or doing business with Belarusian companies in sectors including banking, petroleum products and potash.

The EU “introduced new restrictive measures against the Belarusian regime,” EU governments said in a joint statement. The sanctions were first agreed last Friday by national envoys to the EU and will now be published in full in the bloc’s official journal.

EU leaders were outraged by the interception of the Ryanair plane flying between Athens and Vilnius on May 23. With President Alexander Lukashenko so far impervious to foreign pressure over disputed elections last August, the EU said it wanted to dramatically escalate pressure on the country.

The EU said the new targeted economic sanctions include the prohibition to “directly or indirectly sell, supply, transfer or export to anyone in Belarus equipment, technology or software intended primarily for use in the monitoring or interception of the internet and of telephone communications, and dual-use goods and technologies for military use and to specified persons, entities or bodies in Belarus.”

Trade in petroleum products, potash used for fertiliser, and tobacco products is restricted. Access to EU capital markets is now also restricted, as well as prohibitions on providing insurance and re-insurance to the Belarusian government and Belarusian public bodies and agencies is prohibited.

The European Investment Bank will stop loans to the country.