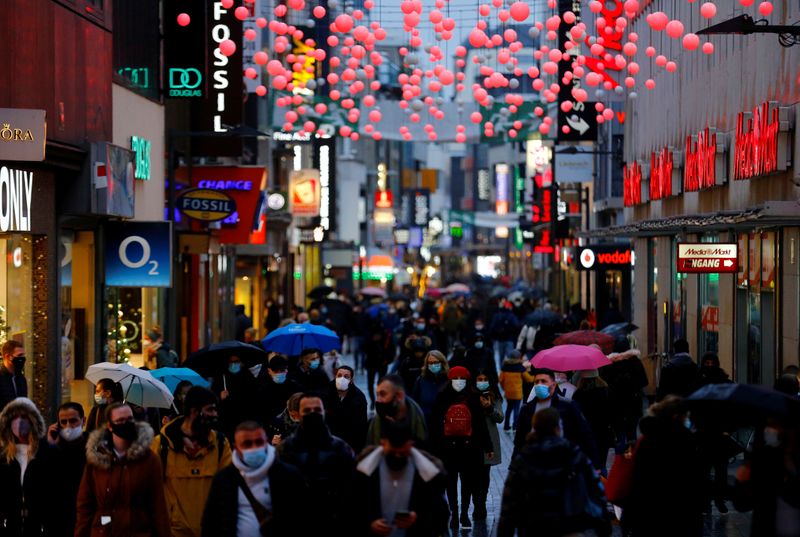 FILE PHOTO: Shoppers walk down Hohe Strasse shopping district one day before Germany goes back to a complete lockdown due to the coronavirus disease (COVID-19) outbreak, in Cologne, Germany, December 15, 2020. REUTERS/Thilo Schmuelgen

BRUSSELS (Reuters) – Euro zone economic sentiment hit a record high in July, estimates from the European Commission showed on Thursday, but a drop in optimism among consumers and the slower rate of increase may signal the peak is fast approaching.

The EU executive said its monthly survey that sentiment in the 19-country single-currency bloc rose to 119.0 points in July, a record since data began to be collected in 1985, from 117.9 in June, which was already a 21-year high.

However, as the positive impact of the reopening of economic activities begins to wane and fears grow around the Delta coronavirus variant, sentiment grew at a slower pace.

“Compared to the last months, the latest improvement was much weaker, suggesting that the indicator is approaching its peak,” the European Commission said in a statement.

The rise in sentiment in July was supported by a new surge of optimism in the manufacturing sector which reached another all-time-high after repeated increase this year as factory managers remain largely upbeat.

Confidence also rose to its highest level since August 2007 in the services sector, which has been hit hardest during the pandemic and is the chief beneficiary of the current reopenings.

But the rise in the overall sentiment was checked by a decline in consumers’ confidence, after a five month rally, partly caused by households’ worse assessment of the future economic situation and plans to make major purchases.

That contributed to a slight fall of optimism in the retail sector.

Selling prices expectations continued to increase across the board in line with forecasts of higher inflation towards the end of the year in the euro zone.

New Hampshire governor on the future of the Republican party