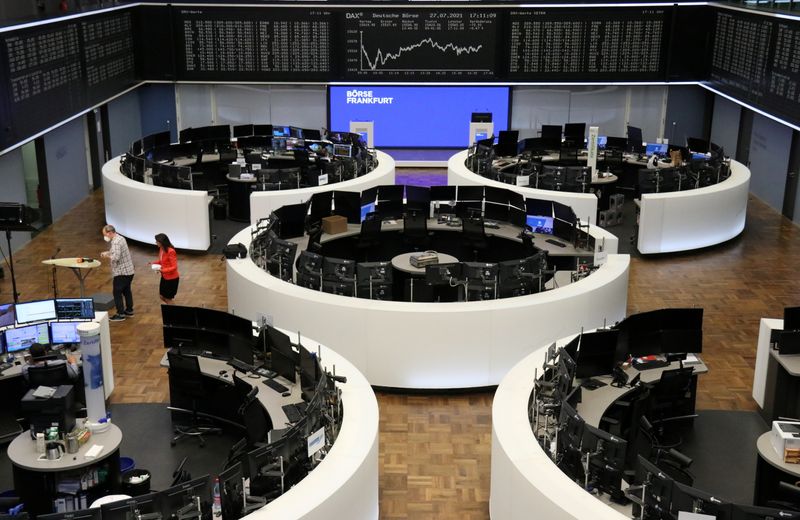 The pan-European STOXX 600 index rose 0.4% after two sessions of declines.

UK’s Barclays jumped 4.1% as it announced resumption of shareholder payouts after beating first-half profit expectations, while German lender Deutsche Bank edged up after it delivered a better-than-expected quarterly profit.

The tech sector was propped up by a 3.3% rise in Capgemini after the French consulting and IT services provider raised its 2021 outlook.

Analysts now expect companies listed on the STOXX 600 to report profit growth of 120.8% in the second quarter versus 115.2% forecast last week, according to Refinitiv IBES estimate.

“Ratings are certainly higher than they were, but they’re being backed up by earnings growth, and central banks continue to be supportive.”

The U.S. Federal Reserve will publish its policy decision later in the day, with investors waiting to see whether there are more clues on the timing of tapering as policymakers face spiking inflation in the world’s largest economy.

Wizz Air added 5.0% after the Hungarian airline forecast capacity to ramp up to between 90% and 100% of pre-pandemic levels in July and August.

Other UK airlines including easyJet and British Airways-operator IAG also gained after multiple reports said the UK is set to exempt double-vaccinated visitors from the EU and the United States from quarantine.

Among decliners, Dutch semiconductor supplier ASM International slipped 1.1% after its forecast for revenue growth in the coming quarters fell short of analysts’ estimates.

(Reporting by Sruthi Shankar in Bengaluru; Editing by Sriraj Kalluvila)