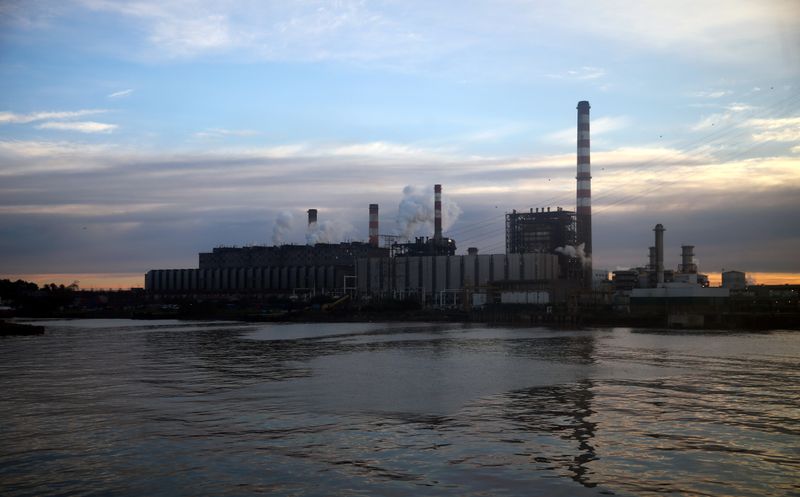 Smoke comes out of an electric plant on the shore of the polluted River Plate in Buenos Aires, Argentina, June 5, 2017. Picture taken on June 5, 2017. REUTERS/Marcos Brindicci/File Photo

WASHINGTON (Reuters) – Three think-tanks will unveil a proposal on Monday to avert a looming debt crisis and help heavily-indebted countries accelerate moves toward more sustainable growth and a low-carbon economy as they recover from the COVID-19 pandemic.

The “Debt Relief for a Green and Inclusive Recovery” proposal is modeled on the so-called Brady bonds issued by Latin American countries in the late 1980s that allowed commercial banks to exchange their claims on developing countries into tradable instruments and get debt off their balance sheets.

The plan, developed by the Boston University Global Development Policy Center, the Heinrich Boell Foundation and the Center for Sustainable Finance at SOAS University of London, calls for the Group of 20 major economies to set up a new global facility to guarantee new bonds that could be swapped by private creditors for old debt with a significant haircut.

The coronavirus pandemic and the associated economic fallout have exacerbated high debt levels in many low- and middle-income countries, hampering their ability to respond to the health and economic crisis and climate-proof their economies.

The G20 response thus far has focused on the poorest countries, leaving out 22 of the 72 countries seen at high risk of debt distress. And private sector creditors have largely failed to join the G20 freeze in debt service payments and the broader common framework for debt treatments.

Debt levels have continued to rise in emerging markets, reaching a record high of more than $86 trillion in the first quarter, according to the Institute of International Finance.

While major economies are using COVID-19 stimulus funds for kickstarting a green pivot, it has proven challenging to marry the urgent need for debt relief with the push for turning economies greener – especially for resource-focused economies.

“The G20 need to be bold, and they need to act now. Past experience tells us that delaying the response to debt crises leads to worse outcomes and higher costs for debtors and creditors alike,” the groups said in their report.

They urged G20 finance officials, who will meet on July 9-10, to expand the debt treatment framework to include middle-income countries, and to back Brady-type credit enhancements for new bonds that could be swapped for old debt, albeit with significant write-offs, to ensure private sector participation.

The guarantee facility should be overseen by the World Bank and the plan should require countries receiving debt relief to align their policies with the Paris climate accord and the 2030 Agenda for Sustainable Development, the report said.

Countries failing to service debt on the new bonds would see the collateral released to the benefit of private creditors, and the missed payment would have to be repaid by the country to the guarantee facility, it added.

The International Monetary Fund and World Bank should also carry out enhanced debt sustainability analyses that account for climate risks and spending needs to bolster climate resilience, and the fund should make its programs conditional on a restructuring process that includes private creditors.