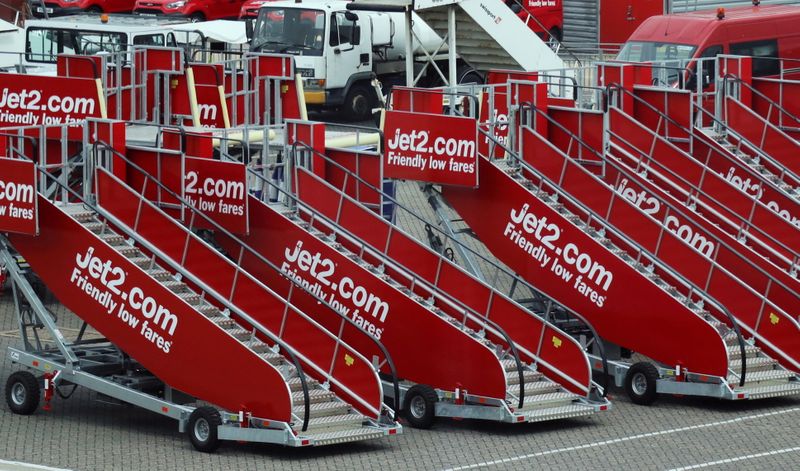 By Tim Hepher and Sarah Young

If confirmed, the unusual decision by a leisure carrier to switch suppliers could involve the purchase of around 50 Airbus jets, worth some $5 billion before widespread airline industry discounts of at least 50%, one of the sources told Reuters.

“As a successful airline and tour operator we are constantly in discussion with different aircraft manufacturers; this is part of our normal course of business,” a Jet2 spokesperson said.

Speaking on condition of anonymity, the sources cautioned a deal would depend on the outcome of talks that are ongoing amid fierce planemaker competition in the wake of the coronavirus travel slump, but said Airbus was seen as current front-runner.

One of the sources however said it was too early to speculate on a deal with the European manufacturer.

Jet2’s potential order comes after a difficult 16 months for the UK travel industry.

Pandemic travel restrictions have lasted longer in Britain than the rest of Europe and while demand has started to recover, fears over last-minute rule changes mean bookings this summer will be muted compared with expectations earlier in the year.

Jet2 raised 422 million pounds ($586 million) through a share issue in February which it said was to help it ride out the COVID-19 pandemic.

A year of booking surges followed by waves of holiday cancellations as restrictions change has, however, helped boost the popularity of package holidays, as customers see the benefit of an operator reorganising their trip for them.

Pioneered in Britain in the 1950s, package holidays saw millions of Britons transported to Spain and other Mediterranean sunspots with all-in deals involving flights and hotels, but lost ground to low-cost airlines with the arrival of the Internet.

Leeds-based Jet2 has roots in a freight carrier that flew flowers to UK markets from the Channel Islands. Former British aerobatics champion Philip Meeson bought the firm and transformed it into an airline flying passengers from 2003.

Its fleet decisions have captured attention because it remains one of the few medium-haul airlines yet to make a choice between the latest generation of narrowbody jets, the 150-seat A320neo or larger A321neo, and the Boeing 737 MAX.

It has so far purchased 34 Boeing 737-800 aircraft which it snapped up at a time when analysts said bargains were available towards the end of that model’s production cycle from 2015. Included leased jets, it says it operates some 90 aircraft.

Amid a near-dearth of post-crisis activity outside the United States, Boeing is fighting hard to shore up demand for its 737 MAX following a safety grounding and could yet try to head off a deal between Jet2 and Airbus, the sources said.

The scale of potential industry discounts emerged this week when Corriere della Sera reported leaked details of proposals to supply jets to Italian airline ITA, where Airbus and Boeing are competing hard for business.

The Italian newspaper outlined detailed offers from Airbus including $49 million for A320neos. The most recent published list price for the jet was $111 million in 2018, implying a discount of 56%. Sources say negotiated prices vary and depend on the size of the order, timing and aircraft configuration.

Both Boeing and Airbus regularly accuse each other of slashing prices to win deals.

Airbus nonetheless argues that prices for the larger A321neo model, which is in high demand and until recently faced muted competition from Boeing, have held up well during the crisis.