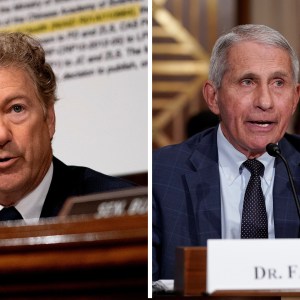 Back during his first clash with Rand Paul over NIH funding for “gain of function” research at the Wuhan lab, Anthony Fauci was clearly being very lawyerly in his denials. Josh Rogin has a helpful analysis of the latest dust-up between the two that cuts to the heart of the matter:

Fauci insisted that it “was judged by qualified staff up and down the chain as not being gain of function.” He was using a specific definition crafted by the Department of Health and Human Services in 2017 when the Obama administration’s pause on gain of function research was lifted. “And Senator Paul, you do not know what you are talking about, quite frankly,” Fauci added.

Paul responded by accusing Fauci of “trying to obscure responsibility for 4 million people dying around the world.” Fauci called Paul a liar. The exchange ended with each side declaring victory.

Both men were playing to the cameras, but many scientists think Paul actually does know what he’s talking about. One of them is Rutgers University microbiologist and biosafety expert Richard Ebright, whom Paul quoted as saying this research “matches, indeed epitomizes the definition of gain of function research.”

Other scientists, even those who believe the lab leak theory likely, argue that Fauci is technically correct, although they note that the official definition is so narrow it enables anyone to avoid the review process Fauci himself helped to establish. In other words, if the oversight system for reviewing risky research is almost never used, what good is it?

But it doesn’t matter which “gain of function” definition you prefer. What everyone can now see clearly is that NIH was collaborating on risky research with a Chinese lab that has zero transparency and zero accountability during a crisis — and no one in a position of power addressed that risk. Fauci is arguing the system worked. It didn’t. Even if the lab leak theory isn’t true, what’s clear is that we need more oversight of this risky research, both in the United States and in China.