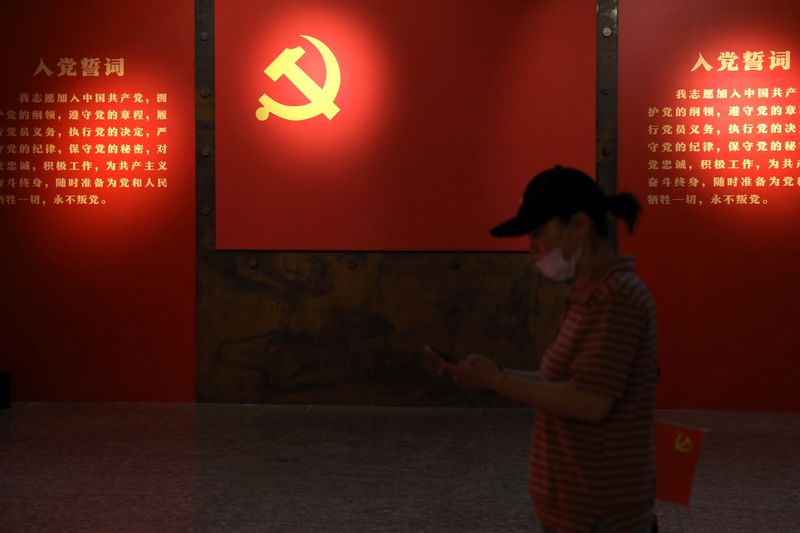 A visitor walks past a board with an emblem of the Communist Party of China at an exhibition marking the 100th anniversary of the founding of the Party, in Beijing, China June 22, 2021. Picture taken June 22, 2021. REUTERS/Tingshu Wang

She is also a staunch Chinese Communist Party (CCP) member.

“People assume party slogans ring hollow because they sound too ‘glorious’. But if you put aside the rebellious spirit youth usually have, these slogans are actually a good guide for self-cultivation,” Lectrice told Reuters by phone from Shanghai.

China’s Communist Party, which celebrates its 100th anniversary on Thursday, is at the peak of its power under President Xi Jinping, analysts say, as China’s post-COVID economy surges and its international stature grows.

Some Chinese privately say they find the party’s earnest slogans and focus on collectivism anachronistic in an increasingly individualistic society.

But a growing cohort of young members reconcile those contradictions with an increasingly nationalistic pride in China’s success, and in the opportunities that membership affords, several members and political analysts say.

“I joined the party because I want to have a platform to push for social causes with my peers,” said Lectrice, a doctoral student in philosophy, who said she volunteered a few years ago to counsel women suffering from domestic abuse and wrote articles in support of China’s nascent #MeToo movement.

Authorities in China have in recent years censored or detained women advocating for feminist causes, reflecting Beijing’s general intolerance for social activism. But Lectrice says those activists were “too extreme” and had anti-Party agendas that went beyond women’s rights.

Reuters spoke with 10 young party members for this story, most of whom did not want to be quoted. Those who agreed to quoted declined to use their full names because they had not been authorised by the party to speak with foreign media.

Xi has made consolidation of the party’s role in society central to his vision for a strong China, defying Western expectations in the early 2000s that a rising middle class would ease the party’s grip.

Party membership grew by a record 2.43 million in 2020, and as is typical, about 80% of new joiners were 35 or under, according to figures released on Wednesday by its Organisation Department. Growth this year is set be even faster, with 2.31 million joiners in the first six months, bringing membership to 95.15 million. Joining the party is selective process that normally takes two to three years.

The Organisation Department, in charge of members’ affairs, and China’s State Council Information Office did not respond to requests for comment on what draws youth to the party.

Xi’s rise ended a decade of relatively open political discussion a time when the party was less central to life in China.

As room for public dissent has narrowed dramatically under Xi, China has ramped up pro-party education and propaganda, which has fed rising nationalism, especially among twenty-somethings, who have known only a thriving and confident China, four Chinese political analysts said.

“They are only exposed to positive propaganda about how great the country is,” said Zhang Ming, a retired professor of politics at Renmin University whose social media posts have often been deleted by censors.

The party’s resurgence under Xi, meanwhile, has added to the perception that membership is important for career and personal advancement, the party members and experts interviewed by Reuters said.

Several young members said privately that they joined so that it would be easier to get jobs, especially in cities like Beijing where a position in civil service provides job security and makes it easier to get coveted hukou residence status.

“Many of my peers join the party because that can give them an advantage when applying for jobs,” said Roy, a 29-year-old Chinese doctoral student in Britain who said he joined the party 10 years ago to serve the underprivileged.

When Vivian, 30, was preparing to join the party in high school, her father told her he expected his only child to be willing to lay down her life if the party required it – a notion that gave her pause.

“Then I thought about how I got more life opportunities than my grandmother, who was illiterate and sold pancakes by the street, and how I need to step up if I want my children to have a better life than me,” she said during an interview at a Beijing Starbucks.

She joined when she graduated from high school, and now teaches Marxism at a university in southern China.

“Only the students with the best grades get to join the party, so I see it as a glory and a validation,” she said.