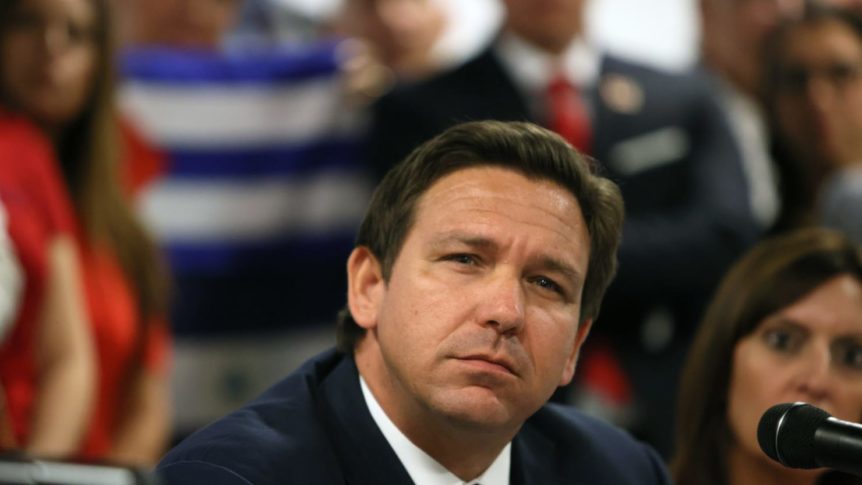 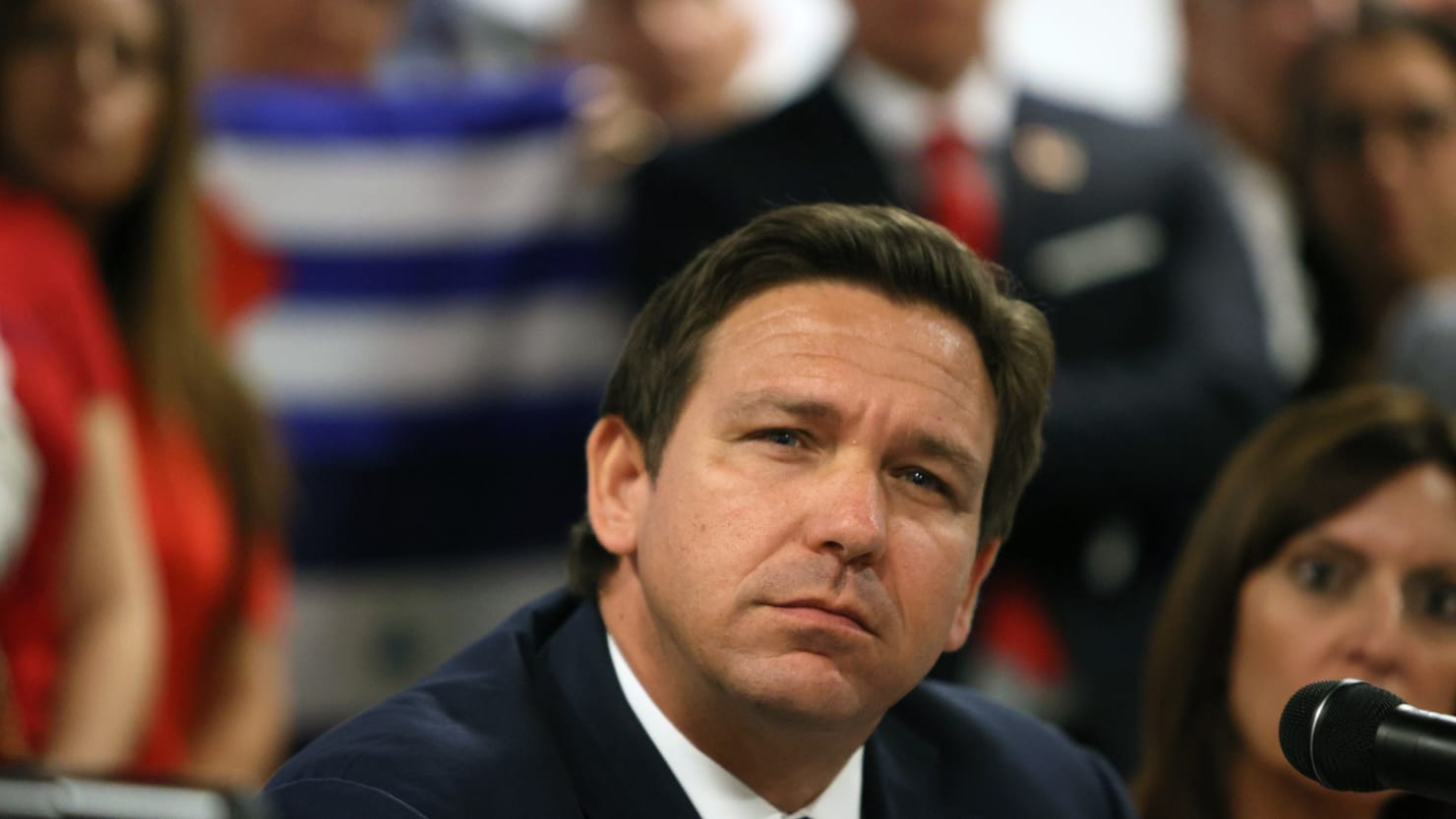 Hours before federal officials on Tuesday issued new mask guidance to combat the surge of the Delta coronavirus variant across America, and even as his state’s hospitals were veering toward disaster, Florida Gov. Ron DeSantis quietly met with anti-maskers.

Among the attendees at the Monday night meeting behind closed doors was at least one L.A.-based doctor who embraced conspiracist rhetoric about the same vaccines DeSantis has purported to champion as his only strategy to fight COVID-19.

The event, held at the state Capitol in Tallahassee, principally featured various COVID-19 masking skeptics. They included a Stanford professor with a history of opposing lockdowns, and a Tallahassee private school student who was “very concerned about masks being required this year.”

Still, the standout may have been Mark McDonald, a Los Angeles clinical psychiatrist.

In an email, McDonald confirmed to The Daily Beast that the various speakers provided their thoughts on why “mandating masks for children in schools [is] not only unnecessary and unsupported by scientific evidence, but also harmful to children physically and psychologically.”

According to a transcript of the Monday event obtained by The Daily Beast, McDonald slammed mask-mandates in general during the panel discussion, calling his home state of California a “medical apartheid state” because of new indoor mask guidelines to curb the surge of cases.

But when asked for comment on his views, McDonald also veered into downright vaccine skepticism.

“There is no medical rationale for vaccinating children,” he wrote in an email to The Daily Beast in which he also suggested both masks and vaccines “don’t work.”

This despite reams of data about vaccines and mask-use that say otherwise, at least for children 12 and older—the only groups for whom the shots have been authorized in the United States so far.

DeSantis’ office did not immediately respond to a request for comment about McDonald’s vaccine claims. When asked for further comment, McDonald told The Daily Beast, “I am not ‘anti-vaccine’ in any sense.”

“My position is that this particular experimental vaccine, which has not received FDA approval due to absence of adequate safety testing for all populations, in particular for children, cannot be ethically offered to anyone under age 18,” he added. “The weighing of risks and benefits in other populations, such as infirm or elderly, is an entirely different calculation.”

Actual infectious-disease experts—and a slew of studies—say otheriwse. And the doctor’s social-media posts paint a picture of a coronavirus skeptic feeding on a diet of far-right outlets.

In several posts on Facebook, McDonald asks why the government was pushing “unapproved experimental vaccines” on children, refers to the deadly pandemic as the “Wuhan virus,” and insists masking minors is “child abuse.”

On his Linkedin profile, McDonald also noted he joined America’s Frontline Doctors—a pro-Trump medical group notorious for featuring a COVID-19 truther who believes in the medical dangers of demon sperm—in their November 2020 summit to discuss the “delusional psychosis” around the deadly pandemic. During the meeting, McDonald also stressed that healthy Americans do not need to mask and spoke out against the irrational fear of the virus that has now killed 600,000 Americans.

“Yesterday just a statistic. Today major news. The experimental vaccines are INEFFECTIVE against the currently circulating non-deadly viral strains,” McDonald wrote in a July 19 Facebook post alongside an Epoch Times article. “So why are we still ordering everyone to get shots, rather than encourage natural immunity?”

In fact, all strains of the coronavirus are deadly, and the vaccines have proven to be effective against the Delta variant, even as there have been some signs of potentially reduced efficacy.

Dr. Peter Hotez, a pediatrician and virologist at Baylor College of Medicine in Houston, stressed in an interview that “it’s important to protect children against COVID-19” with mask use and vaccines when applicable.

“A number of anti-vaccine groups try to claim, based on death rates, that COVID-19 is not important amongst children,” Hotez told The Daily Beast. “The reason that is not true is children can still get very sick and it can cause significant pulmonary, cardiovascular, and neurological effects. COVID-19 can also cause significant rates of hospitalizations in young people.”

Hotez added there was a significant amount of long COVID—defined as “new or ongoing symptoms” that last for several weeks or months—in younger children.

“This idea that young people don’t have to be protected or masked is not what the emerging literature says,” Hotez added, noting that studies about COVID-19 also find that vaccinations are important to curb the spread of the virus, regardless of age.

Indeed, the American Academy of Pediatrics recommended last month that all children older than the age of 2 should wear masks during the upcoming school year, regardless of their vaccination status. The advisory, the leading organization of pediatrics stated, was the result of so many children not yet being eligible for the vaccination—and because masks have been proven to reduce coronavirus transmission.

During the Monday meeting in Florida, first reported by Politico, DeSantis suggested he would call a special session of the state legislature if federal or local authorities tried to impose a mask mandate affecting public-school kids as the academic year nears.

It is no secret that the Republican—who has made waves since the start of the pandemic for his resistance to following the science—opposes COVID-19 mandates of all kinds. But the roundtable with a crowd that included at least one vaccine skeptic came at an alarming time for the Sunshine State and the country.

The Florida Department of Health reported on Monday that the state’s skyrocketing caseload has tripled in the last two weeks, mostly due to the highly transmissible Delta variant. According to the CDC, every county in the state has “high” levels of COVID-19 transmission, or a test positivity rate of 10 percent or higher in the last week. Florida has accounted for as many as a fifth of new COVID-19 cases in America in recent days, as the AP reported.

The state’s rise in hospitalizations, cases, and deaths—which are almost exclusively hitting unvaccinated people—mirrors the surge in states across the country. But in Florida, hospitals are increasingly flooded with unvaccinated sick people, and some of the workers struggling to keep them alive can’t help but seethe at their governor.

An emergency room nurse at John F. Kennedy Medical Center in Atlantis, a city in Palm Beach County, said co-workers were picking up extra shifts to help cover the flood of patients with COVID-19 symptoms.

“The patients in our [intensive care unit] are 100 percent unvaccinated,” the nurse, who spoke on the condition of anonymity for fear of professional retaliation, told The Daily Beast. “I keep hearing about people who don’t want the vaccine for no good reason. They are at restaurants and the bars, but they don’t wear masks.”

DeSantis, the nurse said, shoulders some of the blame. “Our governor is more concerned with opening everything and taking away mask mandates,” the nurse said. “I haven’t heard anything this time around about putting mandates back in place.”

In the past week, entire families have come in with COVID-19-like symptoms, the JFK Medical Center nurse added.

“I’ve had families of three, four, and five,” the nurse said. “The family of five was unvaccinated. I ask the ones with COVID symptoms if they have been vaccinated. A majority of them are telling me no.”

A West Boca Medical Center intensive care nurse, who also spoke on condition of anonymity, said the unit had zero patients with COVID-19 for a few weeks. “It was the longest run we had,” the West Boca nurse said. “In as little as a week, we are now at eight COVID patients in a 16-bed unit, and are converting back to a strictly COVID ICU.”

According to the nurse, one intensive care patient in his 40s relayed that he was not vaccinated because he didn’t think the virus would affect him at his age and was unsure about the side effects. “He believed this is all being blown out of proportion and [thought] he will be fine and out of the hospital in a few days,” the West Boca nurse said. “He is now on a ventilator, on maximum life support, on a prone bed, and fighting for his life.”

Spokespersons for John F. Kennedy and West Boca did not immediately respond to requests for comment.

With the hospital system struggling in the Sunshine State, Monday’s COVID roundtable invited fresh criticism of DeSantis for putting politics over science.

During the event, he repeated the Republican talking point that Americans should have the personal freedom to decide whether to wear a face-covering or not. He also renewed his commitment to fighting against mask mandates, which he has essentially banned across Florida over the past year by rendering them unenforceable by local governments.

“Our view is that this should absolutely not be imposed. It should not be mandated,” DeSantis said Monday. “And I know our Legislature feels strongly about it, such that if, if you started to see a push from the feds or some of these local school districts, I know they’re interested in coming in, even in a special session, to be able to provide protections for parents and kids who just want to breathe freely and don’t want to be suffering under these masks during the school year.”

But the deadly combo of unvaccinated people and the Delta variant led the CDC to backpedal—again—on its guidance for mask use on Tuesday. The agency called for all people in K-12 schools to wear a mask, and asked that some Americans—even vaccinated ones—wear masks indoors in certain cases.

In an interview, Dr. Amesh Adalja, senior scholar at the Johns Hopkins Center for Health Security and a specialist in infectious diseases, stressed that there is no evidence “that vaccinated individuals are driving these cases.” He also said that in hot spots like Florida, “masks are a critical component” to making sure the local healthcare system does not get overrun with cases.

The commitment to opposing federal health officials has also become a focal point of DeSantis’ emerging re-election campaign. Last month, he sued—and eventually won—a lawsuit against the CDC for moving to implement safety restrictions on cruise ships. And last week, his campaign began to sell drink koozies and shirts that say “Don’t Fauci My Florida” in a direct hit against the nation’s leading infectious disease expert.

​​“How the hell am I going to be able to drink a beer with a mask on?” one koozie says.

On Monday, DeSantis did stress that vaccines have provided a “significant decline in mortality” for COVID-19 patients, after coming under fire for failing to push them hard enough—especially to young people—in the past. But he again decried the “unspeakable burdens” Americans have to endure to protect themselves from the virus, and questioned whether those precautions will have “long-term implications” for minors.

Dr. Adalja, for his part, suggested anyone likening asking kids to wear masks to “child abuse” was fundamentally out of step with reality.

“Everyone wants schools to operate without masks, and masking children is something you want to avoid,” the doctor said. “But school districts need to have flexibility based on local positivity rates.”

“If DeSantis doesn’t want children to wear masks, he should mandate teachers be vaccinated,” he added.