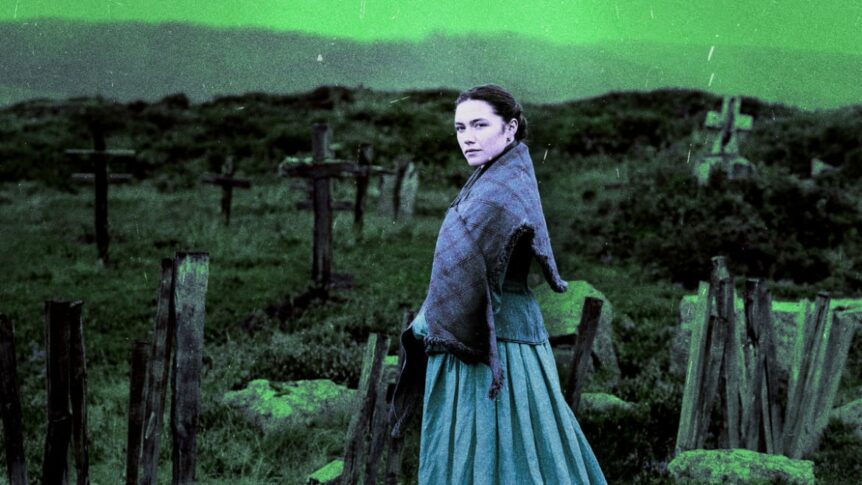 Sebastián Lelio’s films about female sorrow and resilience also double as commentaries on cinema itself, and that’s made overt—if no less complex and entrancing—by The Wonder (Nov. 2 in theaters; Nov. 16 on Netflix), the Chilean director’s adaptation of Emma Donoghue’s 2016 novel of the same name. Co-written with Donoghue and Alice Birch, and led by an intensely coiled performance from Florence Pugh, Lelio’s 19th century drama is a multifaceted portrait of storytelling: the way it enlightens and deludes, tells us what we long to hear and forwards the myths we want to perpetuate, and blinds us to the truth even as it opens our eyes to it. Equally haunting, heartbreaking and heartening, it’s a narrative about narratives’ ability to transform, destroy, resurrect, imprison, and liberate.

Lelio’s self-conscious interests are apparent from the opening moments of The Wonder, in which his camera gazes at the backside of a film stage—full of scaffolding and other equipment—before panning around to his actual ship-interior set, all as a narrator (later revealed to be Niamh Algar’s Kitty) announces, “Hello. This is the beginning. The beginning of a film called The Wonder. The people you are about to meet, the characters, believe in their stories with complete devotion. We are nothing without stories.” That sentiment will later be repeated by more than one figure, just as it’s reflected by the action proper, which focuses on an English nurse named Lib Wright (Pugh) who, in 1862, is summoned to famine-stricken Ireland to observe a young girl named Anna O’Donnell (Kila Lord Cassidy) who’s survived for four months without eating.

Lib has been tasked with this “watch” by a committee of male community leaders, including the O’Donnell clan’s parish priest (Ciarán Hinds) and Dr. McBrearty (Toby Jones), who are split between whether the origins of this amazing turn of events are scientific or religious. To that end, these men have hired a nun (Josie Walker) to split oversight duties with Lib, and they all have various reasons for wanting their preferred explanation for Anna’s survival to be verified. So too does Anna’s mother Rosaleen (Elaine Cassidy), who’s convinced that her daughter is being honest when she claims that her only source of nourishment during this stretch has been “manna from heaven.” Lib, however, is unsure that any holy work is at play, and her concern for Anna goes from serious to grave upon spending time with the teenager, this despite the fact that, considering her non-existent diet, Anna initially appears to be in fantastic shape.