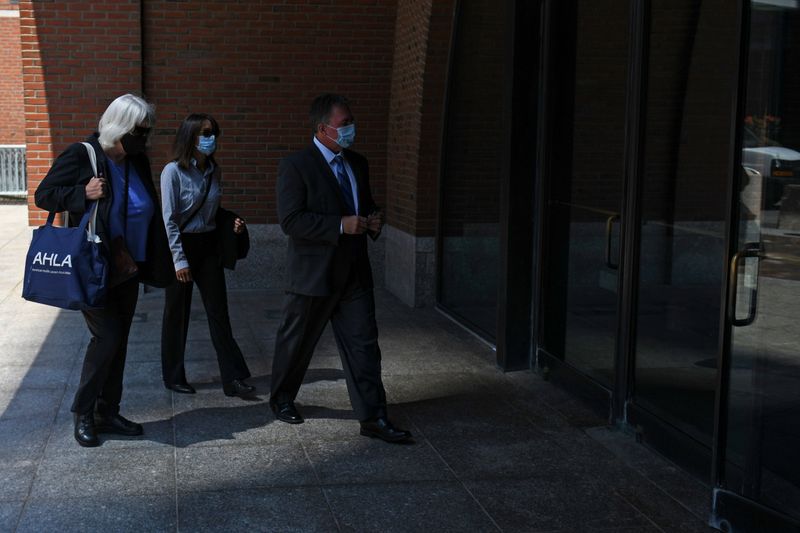 Former police captain who went on to work for eBay Inc Philip Cooke arrives at court for sentencing in his cyberstalking case in Boston, Massachusetts, U.S., July 27, 2021. REUTERS/Nicholas Pfosi

(Removes erroneous “on” in first paragraph and adds weekday)

BOSTON (Reuters) -A former supervisor for security operations at eBay Inc was sentenced on Tuesday to 18 months in prison for his role in a cyberstalking campaign that targeted a Massachusetts couple whose online newsletter was viewed as critical of the e-commerce company.

Federal prosecutors in Boston said Philip Cooke, a retired police captain in Santa Clara, California, and other employees participated in a scheme to harass the couple through Twitter and by sending them disturbing packages, including live cockroaches.

U.S. District Judge Allison Burroughs called the employees’ actions “really abominable” as she sentenced Cooke, who must also serve a year of home detention and pay a $15,000 fine.

“It’s almost unfathomable to me,” Burroughs said. “I’m not sure if I saw it on television I would find it believable.”

Both of the victims, David and Ina Steiner, spoke in court, describing to the judge a bizarre, nightmarish ordeal that left them afraid to leave their home in Natick, Massachusetts, and concerned for their safety.

“We were terrified,” Ina Steiner said.

Cooke, a former supervisor of security operations at eBay’s European and Asian offices, was the first of seven former eBay workers who have been charged in the case to be sentenced. Four others have also pleaded guilty.

They did so after two top executives, including former Chief Executive Devin Wenig, expressed frustration with the newsletter, EcommerceBytes, according to prosecutors and a lawsuit the couple filed.

Prosecutors said Wenig texted the other executive after the newsletter’s editor published an article about eBay, saying it was time to “take her down.” Wenig was never charged and has denied knowing about the scheme.

Cooke, in court, said he should have sought to prevent what became “horrific behavior to please the boss.”

“It’s crystal clear this was all wrong from start to finish,” he said.

(Reporting by Nate Raymond in Boston; Editing by Dan Grebler)