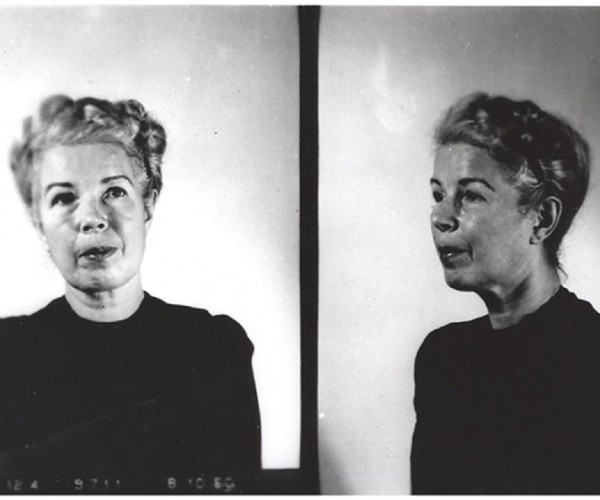 If there were such a thing as a “popular” American war, World War II would be it.

The last conflict with a clear U.S. victory, it has been the basis for thousands of movies — ranging from putrid to excellent.

World War II is a story showing no signs of ever drying up, and its indicaual tales are truly endless.

In the pantheon of WWII flicks, “American Traitor: the Trial of Axis Sally” lands somewhere just south of middle on the quality scale.

This is truly a shame as the material is beyond ripe and appealing.

It’s during the opening credits where we notice the first red flags.

This film has a grand total of 36 producers.

Rarely in the history of the motion picture medium has a feature film had so many chiefs.

Granted, most of them are probably just financial backers, but needing such a large amount of people for such a small scale production means nobody was totally won-over enough by its premise and/or willing to make a substantial monetary investment.

Three people wrote the screenplay which was based on a book written by two; that’s never a good sign.

Thus, we have the makings of the classic “too many cooks in the kitchen,” guaranteed to spoil the soup.

Veteran B-film director Michael Polish does himself no favors by employing a back-and-forth, non-linear presentation which is more of a distraction than a flexing of adroit storytelling.

Meadows Williams stars as Mildred Gillars, an American ex-patriot who relocated to Berlin in 1934 and taught English at a Berlitz school before landing an announcer gig in 1940 on German radio.

Although advised by the U.S. State Department to leave Germany in 1941, Gillars chose to stay, because her fiancé at the time stated he wouldn’t marry her if she returned to the U.S.

In 1942, Gillars was (easily) coaxed by new love interest and radio program director Max Otto Koiscwhitz (Carsten Norgaard) to be the main attraction in multiple shows designed to convince American soldiers (in a most cloying and seductive manner) that the Nazis weren’t their enemy and they were fighting a losing cause.

“Axis Sally” was soon to become Gillars’ most oft-used nickname.

How the U.S. government allowed armed forces soldiers to ever hear such broadcasts in the first place is a nagging mystery and one that is never even addressed in the film.

Also never brought up is how Gillars was located and eventually captured in 1946.

A series of bizarre, stranger-than-fiction events which could provide enough material for another (likely better) stand-alone movie are never introduced or suggested.

This includes details regarding Gillars’ life after her trial and before her death in 1988.

It’s beyond worth noting that the second billed Thomas Gretschmann appears as Joseph Goebbels, Adolf Hitler’s second-in-command and Reich Minister of Propaganda.

The interaction between the Goebbels and Gillars characters is outwardly impressive, although no evidence exists that the two ever actually met, much less creatively “collaborated” as depicted.

One scene featuring a particularly abhorent physical interaction between Goebbels and Gillars comes off as patently base, off-putting, and thoroughly unneeded.

Swimming upstream against all of the factual omissions and storytelling sleight-of-hand is the titular trial, highlighted by Al Pacino as Gillar’s assigned attorney James Laughlin.

Chewing up more scenery than he did as another lawyer in ” . . . And Justice For All”(1979), Pacino’s mere presence and typically dedicated performance lifts the production from bland mediocrity to passably watchable.

Gillars was ultimately charged with 10 counts of treason and was given a jury trial amid an air when she was, as the Laughlin character states, “the most hated person in America, after Hitler. The only difference is she is still breathing.”

Questions of First Amendment rights are introduced in the trial and are argued against with Gillar’s sworn and signed allegiance to the Third Reich, which may or may not have been done under duress and/or threats of death.

The story of Mildred Gillars is admittedly engrossing and calls into question many constitutional, legal, ethical, and moral issues.

Given the fact what she did took place on foreign soil during war time only makes the situation all the more muddled and complicated, but that is not the issue here.

The question is, does this work as an entertaining and/or informative movie?

What this story needs is a retelling via the increasingly popular “docuseries” treatment.

Either HBO or Netflix should do a four-part piece with few artistic liberties and no extraneous embellishments. Present what is known and leave out all of the conjecture, hypothesizing, and unneeded titillation. Allow Gillars’ legacy to sink or swim in the eyes of public opinion based just on the facts.

Originally from Washington, D.C., Michael Clark has written for over 30 local and national film industry media outlets and is based in the Atlanta Top 10 media marketplace. He co-founded the Atlanta Film Critics Circle in 2017 and is a regular contributor to the Shannon Burke Show on floridamanradio.com. Over the last 25 years, Mr. Clark has written over 4,000 movie reviews and film-related articles and is one of the scant few conservative U.S. movie critics. Read Michael Clark’s Reports — More Here.