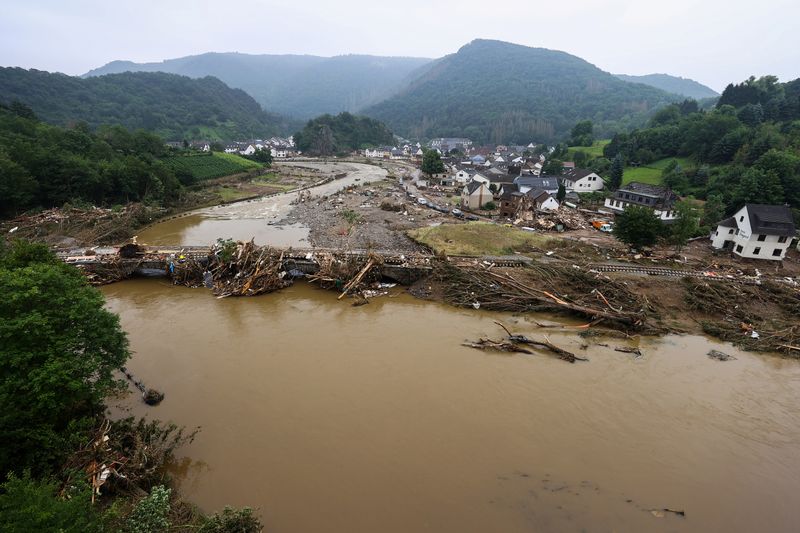 By Hakan Erdem and Frank Simon

BAD NEUENAHR-AHRWEILER, Germany (Reuters) – Business owners in a town badly hit by the record flooding in Germany struggled on Saturday to pick up the pieces after their livelihoods – from old books to wine – were swept away or caked in sludge.

Mud still filled the streets of Bad Neuenahr-Ahrweiler, nestled in the Ahrweiler district where at least 98 people were killed.

“Everything is completely destroyed. You don’t recognise the scenery,” said Michael Lang, owner of the Ahrweindepot wine shop, fighting back tears.

“You cannot imagine the change that has taken place in the countryside,” he added, standing in front of the remnants of his store in the town’s historic centre. “The interior, the wine bottles, the decoration, it’s all ruined.”

Up the road, Wolfgang Huste was trying desperately to save what was left of his antiquarian bookshop, which was founded in 1988.

“I’ve been an antiquarian, an art dealer and auctioneer for 33 years and there are books that don’t make the heart bleed that much. But we have books from 1510, 1520,” he said, his shoes and books covered in thick layers of sludge.

“We have books that are irreplaceable.”

The floods have so far claimed at least 165 lives in western Germany and Belgium and as waters recede, authorities expect to find more victims.

The floods – Germany’s worst natural disaster in more than half a century – turned houses into rubble and cut power and communications in some regions.

Huste, too, barely made it.

“Had I waited just another minute I would have drowned,” he said of escaping the flood waters. “Corpses were swept down the road, two adults, one kid, they couldn’t save themselves.”