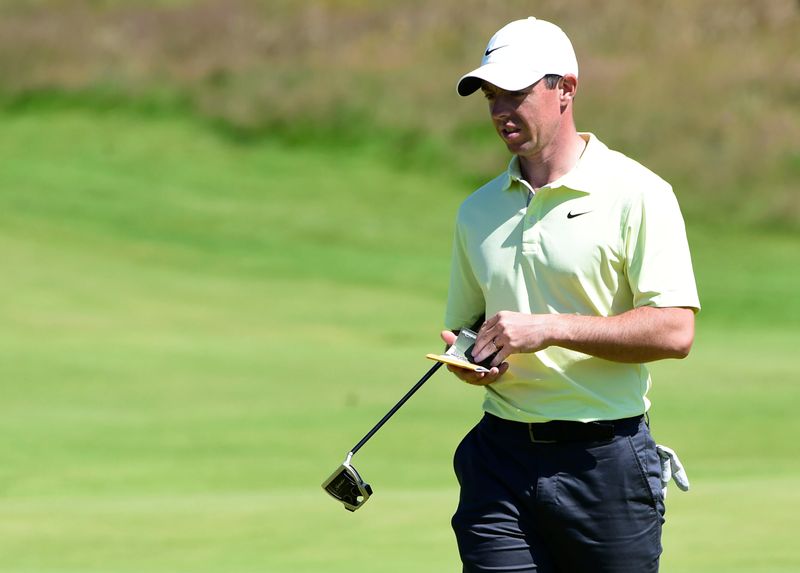 SANDWICH, England (Reuters) – Rory McIlroy was still searching for the spark to ignite a challenge at the British Open as the four-time major winner carded a second successive level-par 70 on Friday.

The Northern Irishman, winner of the Open at Hoylake in 2014, began his second round with successive bogeys and never really got any momentum going thereafter.

Birdies on the fourth, ninth and 12th did get McIlroy back under par but he never looked completely in tune with his game and bogeyed the par-three 16th after finding a greenside bunker.

Another bogey at 17 put the 32-year-old in danger of missing the cut before he delighted his large following with a superb birdie on the 18th to guarantee a weekend spot.

There was no great reaction from 32-year-old McIlroy as the ball rolled in and his body language suggested he feels that his seven-year major drought will extend beyond Sunday.

He was nine shots behind leader Collin Morikawa and he faces a huge task to play himself into contention.

“I thought yesterday I hung in there well,” McIlroy, who had the worst of the wind during his opening round, said.

“I was looking forward to getting out there today and capitalising on the good finish last night but then two bogeys in the first two holes put me behind the eight ball.

“I played well for a good stretch of holes today, getting under par for the tournament, and then a mental error on 16 where I hit a club that was barely going to get over the bunker even if I hit it exactly right.”