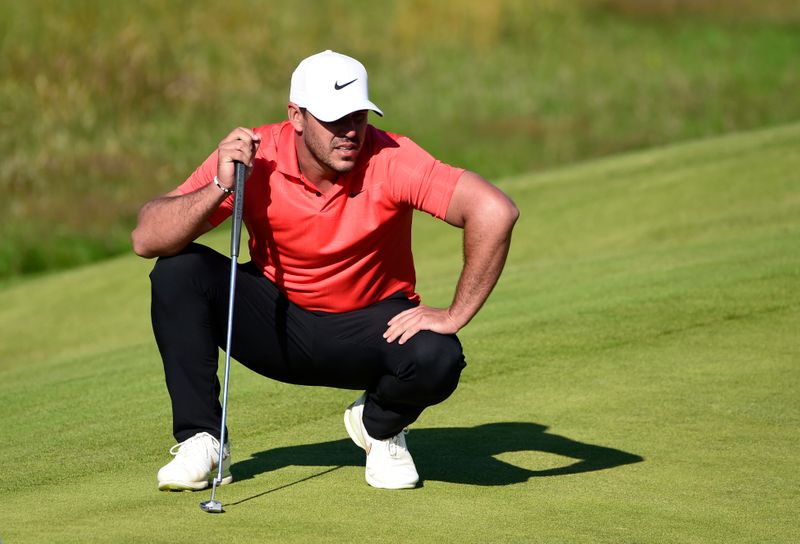 Golf – The 149th Open Championship – Royal St George’s, Sandwich, Britain – July 16, 2021 Brooks Koepka of the U.S. on the eighteenth hole during the second round REUTERS/Rebecca Naden

(Reuters) – Brooks Koepka appeared to take a subtle dig at Bryson DeChambeau in the latest round of their feud, when he said he “loves his driver” in the wake of his fellow American’s faux pas over equipment issues at the British Open.

The tension between world number eight Koepka and number six DeChambeau provided an interesting sub-plot before the event and matters escalated after DeChambeau apologised on Thursday for comments he made about his own driver.

DeChambeau, who has packed on roughly 30 pounds of muscle and become the longest hitter on the PGA Tour, said his driver “sucks” after he found four of 14 fairways in his one-over-par start at Royal St. George’s.

Speaking in an interview with Golf Channel after his second round, Koepka said he “drove the ball great” with a grin.

“Love my driver. Everything is going really well,” Koepka, who was tied-12th before Saturday’s third round, added before tweeting a picture of himself with the caption: “Driving into the weekend.”

Koepka has previously called out DeChambeau for slow play while DeChambeau made fun of Koepka’s physique in an interview.

A recent Golf Channel tape that never aired was leaked showing Koepka rolling his eyes and making disparaging remarks as DeChambeau walked past in view of the camera after this year’s PGA Championship.

Koepka also offered beer to fans who heckled DeChambeau at the Memorial tournament in June.

DeChambeau, who was booed by the crowd on Friday before surviving the cut, apologised again.

“I made a mistake,” DeChambeau told select reporters after declining media requests, according to ESPN.

“As time goes on, I’ll look at this as a growing moment for me personally, and hopefully I can make the right things going on from here on out. I was in a heated situation … I feel really bad about it.”

(Reporting by Shrivathsa Sridhar in Bengaluru; Editing by Stephen Coates)