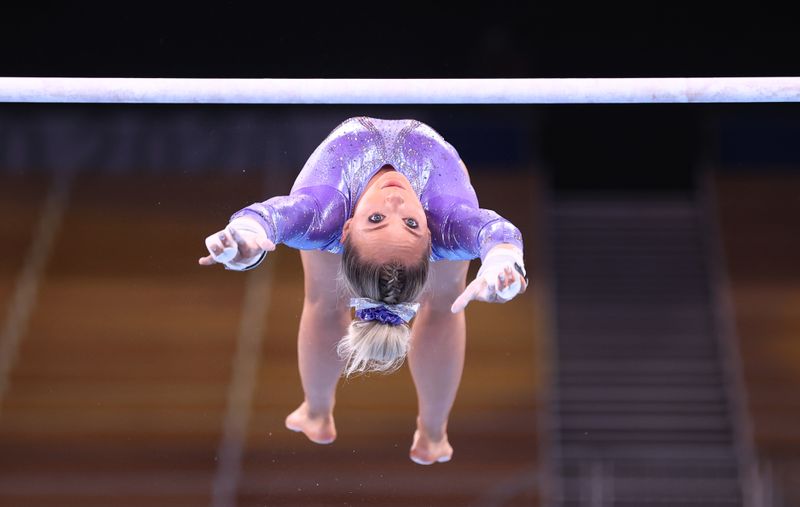 (Reuters) – Mykayla Skinner finally made the U.S. women’s Olympics 2020 gymnastics team after being left off the Rio 2016 squad.

The 24-year-old Arizonan’s vault is good enough to land her on the podium alongside teammate Simone Biles, but she might not get the chance to try.

What happens in the qualification round on Sunday will decide whether a gymnast like Skinner will walk away from the Tokyo Games with a medal or nothing at all. Her biggest obstacle? Her own teammate.

Four-member artistic gymnastics teams have replaced five-member ones from Rio 2016. For 2020, countries could also earn up to two individual spots through various placements at recent competitions.

Fellow Arizonan Jade Carey, 21, earned one of those spots for her performances at World Cup events. Skinner, who trains less than an hour away from Carey, was awarded the second spot last month at U.S. team trials after finishing fifth overall.

Skinner’s vault score can match that of Carey, the runner-up to Biles on the event at the 2019 World Championships, and the American trio are likely the best vaulters in the world.

But USA Gymnastics’ selection of Skinner for the second individual spot was immediately controversial because one of those three will be unable to earn a vault medal due to the “two-per-country” rule, which states a maximum of two athletes per country can fill slots in an event or all-around final.

In Rio, the two-per-country rule kept American Gabby Douglas, the defending Olympic all-around winner, out of all-around finals despite finishing third in qualifications.

Biles is the easy favourite for vault gold, especially if she throws her new double-piked Yurchenko, which has a higher start value than vaults performed by Carey or Skinner.

Skinner’s recent scores suggest she may not make another final besides vault. But Carey is a World silver medalist on floor exercise, where she might debut a new skill harder than any other in the code of points, even topping those done by Biles.

If Carey successfully performs the skill, the triple-twisting double backflip in the stretched position will bear her name going forward.

The U.S. women are expected to take home team gold, but the best chance for all six Americans to leave Tokyo with hardware would be Skinner edging Carey on vault in qualifications and Carey earning a spot in floor finals.

American Sunisa Lee will contend for gold on asymmetric bars, and a second U.S. slot in that final could be filled by Biles or teammate Jordan Chiles. Lee placed second to Biles on floor at 2019 Worlds and won balance beam at U.S. trials, so she has opportunities beyond the bars.