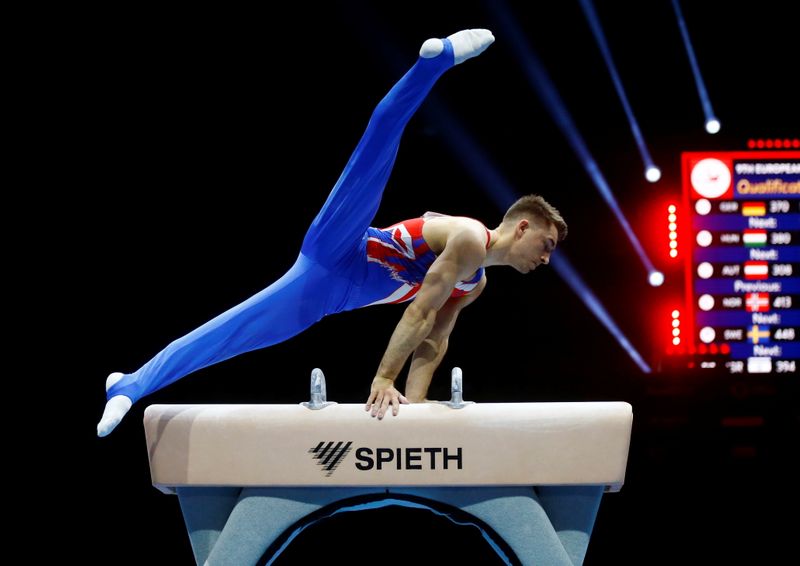 LONDON (Reuters) – Double Olympic gold medallist Max Whitlock will be the old man of Britain’s artistic gymnastics team in Tokyo but he still feels he can deliver as he prepares for his third Games.

A gold medallist at pommel horse and on the floor at the 2016 Rio de Janeiro Olympics, the 28-year-old also has three bronze medals — all around in Rio and team and pommel from London 2012.

“I am at an age where a lot of gymnasts are retiring, maybe even retired,” the three times pommel world champion told reporters as the team was announced this week.

“I’m 28 and the peak age for gymnasts is about 22 or 23 but I’m still going and I’m still making these teams. I am the oldest one in the team but I’m still hopefully going to every competition with the potential to get a title.”

Whitlock, who will be joined by debutants Giarnni Regini-Moran and Joe Fraser, both 22, and 25-year-old James Hall, is thinking still further ahead.

“I still see improvements in terms of what I can do from now until Paris (2024). There’s definitely more skills and more upgrades I can learn,” said the champion. “There’s no chance in stopping any time soon.

“I’m almost a cycle older than these guys but that’s actually kind of a really proud feeling,” he added. “I still feel like there’s more in the tank.”

The recent European championships in Switzerland did not go well, with no medal in his first competition in more than 18 months, but Whitlock insisted the experience had been worthwhile.

Whitlock is prepared for a very different experience to previous Games.

The home of seven times Olympic medallist and triple champion Kohei Uchimura, there are plenty of passionate local fans but it remains to be seen how many can attend due to the COVID-19 pandemic.

Whitlock said he was preparing for every eventuality, including moving his pommel horse into an empty hall to train in absolute silence.

“I’m planning to do that hopefully within the next few weeks,” he said.

“I train within a leisure centre so it’s definitely got the space for me to just move the pommel into the hall next door and have nothing around it.”

The pressure, he said, was building steadily and he knew he would feel he had not done his job properly if he came home without a medal.

“It’s hard not to think about medals after previous results but I really try to put them to the back of my mind. A title would be a dream, it would be amazing but for me it’s all about going there,” said the Briton.

“My goal is to perform a clean routine. That’s going to hopefully help the team, help me individually and hopefully gain a title.”