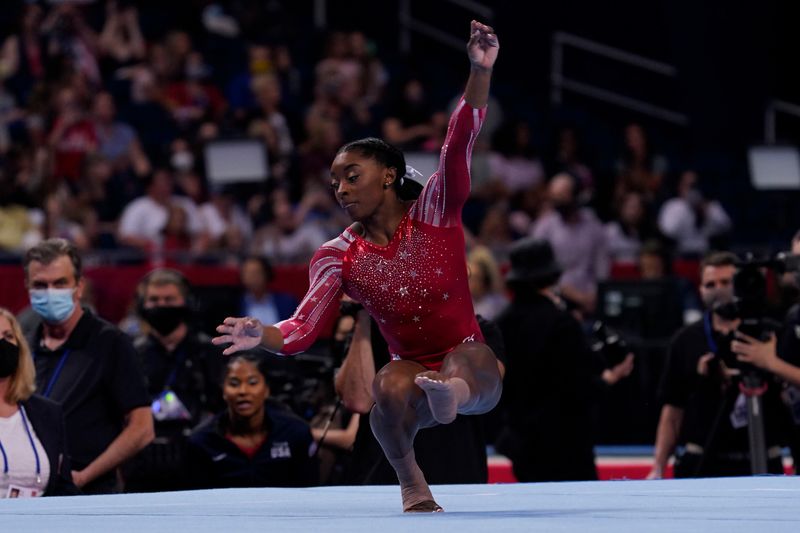 (Reuters) – It was not the night Simone Biles wanted but it was still good enough to secure her ticket to the Tokyo Games as the four-time Olympic champion finished first at the end of the U.S. Olympic gymnastics trials in St. Louis, Missouri on Sunday.

Biles suffered a shock fall from the beam on an aerial cartwheel and sat in silence as a trainer taped her left foot and ankle.

The 19-times world champion, who struggled to keep her composure on the sidelines, was even overheard telling other competitors, “I want to die” after making an uncharacteristic error on the uneven bars earlier in the evening, her right leg wobbling forward on a Weiler.

Reflecting on her tumble off the beam Biles, who topped the all-around scores with 118.098, said she was disappointed not to have performed as well as she could.

“I was just really upset – everybody out here came, gave their heart and I just didn’t give my best performance, so that’s what I was most upset about,” said the 24-year-old.

“I feel like I’ve been emotional this whole week, I just can’t believe Olympic trials are here again, I can’t believe I’m here again,” Biles told NBC. “The journey has been surreal – five years later and we’re doing it again.”

Sunisa Lee, 18, who finished second to Biles in the all-around at the nationals, clinched an automatic spot on the team after finishing second with 115.832.

She brought the house down at the Dome at America’s Center with a full twisting double dismount in a difficult uneven bars routine for a 14.900 score, after a 15.300 performance in the event on the first day of the women’s competition,

She ended the night with a virtually flawless floor routine.

“This means so much to me, I’ve worked so hard for the past couple years,” said Lee, who picked up silver in the floor exercise and bronze on the bars at the 2019 World Championships.

“To just go on the floor and do what I am supposed to do feels amazing.”

Rounding out the gold medal favourite team for Tokyo were Jordan Chiles, 20, and Grace McCallum, 18, who finished third and fourth and whose inclusion was determined by a selection committee. MyKayla Skinner, 24, picked up the individual quota spot.

Jade Carey, 21, who previously qualified for an individual spot through World Cup performances, will also compete.

The United States won back-to-back gold medals in the team all-around events in Rio and London, and four straight in the individual all-around.