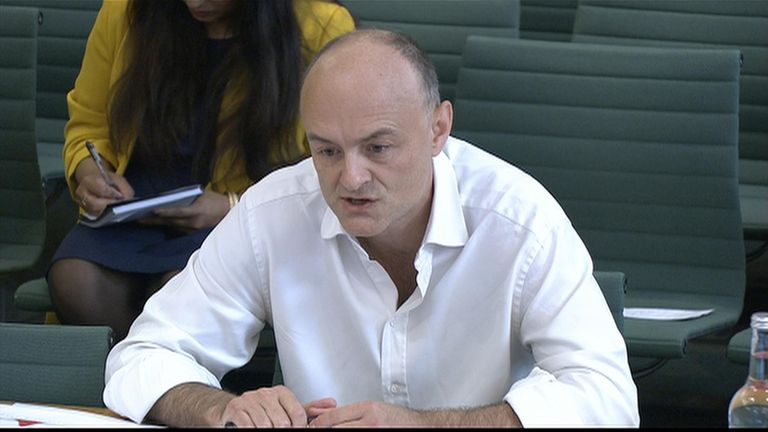 Health Secretary Matt Hancock has denied claims he lied about the COVID pandemic after a scathing attack by Dominic Cummings, saying “we have been straight with people”.

Mr Hancock said: “These allegations that were put yesterday… are serious allegations and I welcome the opportunity to come to the house to put formally on the record that these unsubstantiated allegations around honesty are not true.

“I’ve been straight with people in public and in private throughout.”

‘The health secretary should have been fired’

One of the key claims made by Mr Cummings was that the health secretary lied about COVID testing people before they returned to care homes.

He added that “so many of the allegations were unsubstantiated”.

In further defence of the way he has dealt with the pandemic, he said: “We’ve taken an approach of openness and transparency and spoke of what we do and don’t know.

“Since last January I’ve attended this House over 60 times. With the Prime Minister we have together hosted 84 press conferences, I’ve answered 2,667 contributions to this House and answered questions from colleagues, the media and the public – and we’ll keep on with this spirit of openness and transparency throughout.

“Sometimes what we’ve had to say hasn’t been easy. We’ve had to level with people when it’s been tough, when things have been going in the wrong direction.

“And also we’ve learned throughout. We’ve applied that learning both to tackling this pandemic and making sure that we’re as well-prepared in the future as possible.

“Beyond all this, what matters remains the same – getting vaccinated, getting tested, delivering for our country, overcoming this disease and saving lives, and that is what matters to the British people.”

Boris Johnson‘s former right-hand man gave a blistering account of how the government dealt with the pandemic, with the PM and Mr Hancock taking most of the flak.

During a marathon session lasting more than seven hours on Wednesday, Mr Cummings claimed he, the cabinet secretary and other senior officials continually called for the health secretary to be sacked for “15 to 20 things”, including lying on multiple occasions.

Among the alleged lies were, Mr Cummings said, that there was a protective shield around care homes when in fact people with COVID-19 were being sent back to care homes without being tested.

Mr Cummings said the PM “was close” to firing Mr Hancock in April 2020 “but just fundamentally wouldn’t do it”.

He added that Mr Hancock took too long to get test and trace set up and told the PM: “If we don’t fire the secretary of state and we don’t get testing into someone’s hands, we are going to kill lots of people.”

Mr Johnson’s former chief adviser also said he believes Mr Hancock used government medical advisers Sir Patrick Vallance and Prof Whitty “as shields for himself” so that if things went wrong, he could blame them and say it wasn’t his fault.