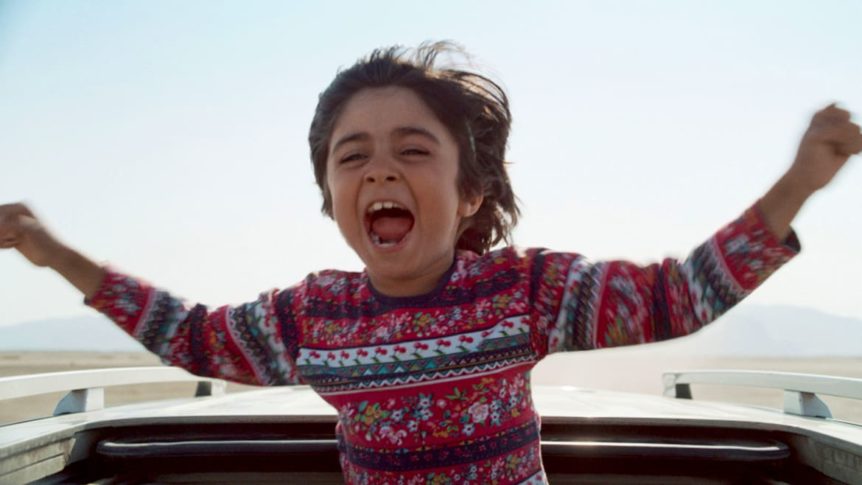 Rayan Sarlak is the scene-stealer of the year, a force of personality so exuberant and endearing that Hit the Road can barely contain him—not that it would want to under any circumstances. A pint-sized motormouth who can’t stop asking questions, crawling about the backseat of his family’s SUV (and the father who shares it with him), and running around with reckless abandon, his voice as loud as his growls are spontaneous, he’s a whirlwind of motion, sound and energy, and exactly the sort of rambunctious spirit that belongs on the expansive silver screen. It’s no surprise that, when he’s introduced pretend-playing a keyboard drawn on his father’s leg cast, we can hear the twinkling notes: the kid is magic.

Fortunately, as great as Sarlak is, he’s not the only laudable aspect of Hit the Road, a spartan and oblique road-trip drama from Iranian writer/director Panah Panahi that, after showings at last year’s Cannes Film Festival and New York Film Festival, premieres in New York theaters on April 22, with a national rollout to follow. Panahi is the son of acclaimed filmmaker Jafar Panahi (Crimson Gold, This is Not a Film), whose decade-long battle against the Iranian government has forced him to make movies on the sly and prevented him from leaving his homeland, and his feature debut feels attuned to his family’s arduous situation, tapping into a sense of alienation, dislocation and separation that they all undoubtedly know well. There’s both humor and heartache in this saga about one clan’s journey toward escape and, with it, disconnection, captured by Panahi with a precision and empathy that marks him as a chip off the auteurist block.

On the dusty side of a busy road that winds through rural mountains, a nameless family has pulled over for reasons that are not immediately apparent. Mom (Pantea Panahiha) sleeps in the front seat as scruffily bearded Dad (Hasan Majuni) does likewise in back, their adolescent son (Sarlak)—whose nickname is “Monkey the Second”—idly lounging on his father’s enormous leg cast. The couple’s eldest son (Amin Simiar) walks around the vehicle, grabbing a water bottle and checking on their dog Jessy, who’s sick and residing in the trunk. A weird electronic buzzing noise awakens Mom, who asks her youngest where they are. “We’re dead,” he replies, and though he hardly intends that statement to be literal, there’s a pall hovering over this unit, one that can’t be specifically pinpointed but lingers in the air like an invisible shroud.