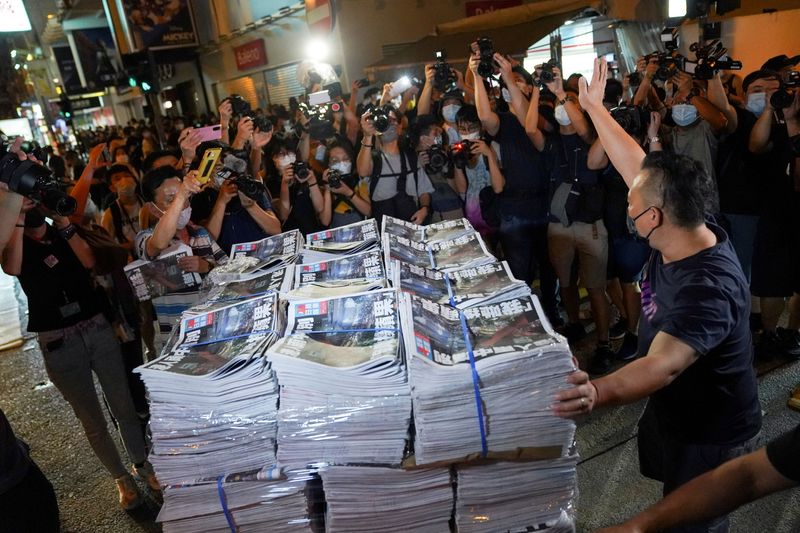 FILE PHOTO: A man gestures as he brings copies of the final edition of Apple Daily, published by Next Digital, to a news stand in Hong Kong, China June 24, 2021. REUTERS/Lam Yik/File Photo

HONG KONG (Reuters) – Hong Kong police arrested a former senior journalist with the Apple Daily newspaper at the international airport on Sunday night on a suspected national security charge as he tried to leave the city, according to local media reports.

Fung Wai-kong would be the seventh staffer at the pro-democracy Apple Daily newspaper to be arrested on national security grounds in recent weeks. He was an editor and columnist at the now-closed paper, local media reported.

The Hong Kong police said in a statement that a 57-year-old man had been arrested at the airport for “conspiring to collude with foreign countries or foreign forces to endanger national security”. They added that he had been detained and investigations were continuing.

Apple Daily, a popular tabloid, was forced to fold following a raid by several hundred police on its headquarters on June 17 and the freezing of key assets and bank accounts. It printed its last edition last Thursday.

Authorities say dozens of the paper’s articles may have violated a China-imposed national security law, the first instance of authorities taking aim at media reports under the legislation.

Critics of the law, introduced last June, say it has been used to stifle dissent and erode fundamental freedoms in the former British colony that returned to Chinese rule in 1997.

Some of the critics also say the closure of Apple Daily, which mixes pro-democracy views with celebrity gossip and investigations of those in power, marks the end of an era for media freedom in the city.

The Hong Kong Journalists’ Association, reacting to reports of the airport arrest, condemned the police for targeting journalists again, and asked them to explain the incident.