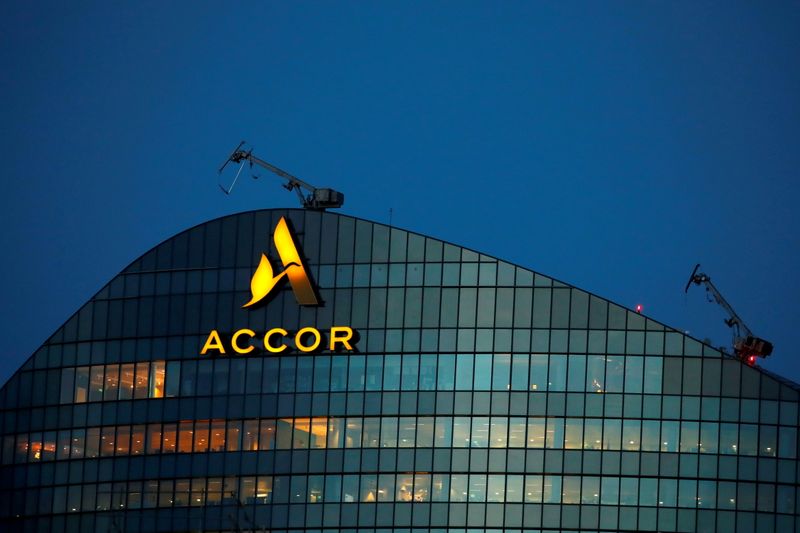 FILE PHOTO: The logo of French hotel operator AccorHotels is seen on top of the company’s headquarters in Issy-les-Moulineaux near Paris, France, February 17, 2021. REUTERS/Gonzalo Fuentes

(Reuters) – Europe’s biggest hotel group Accor SA said on Thursday it was confident of recovery in all geographies with the rollout of COVID-19 vaccines worldwide after the company reported a smaller operating loss for the first half of the year.

“Since May, we have seen a clear recovery. Positive signs including the ramp-up of vaccine rollout and the progressive reopening of borders will continue throughout the summer,” Chairman and Chief Executive Officer Sebastien Bazin said.

Accor, which operates 5,199 hotels in 110 countries, posted a narrower first-half earnings before interest, taxes, depreciation and amortization (EBITDA) loss of 120 million euros ($142.28 million), compared with a loss of 227 million euros a year earlier.

Still under pressure from the pandemic fallout, the group’s revenue per available room (RevPAR), a key measure for a hotel’s top-line performance, slumped 60% compared with the first half of 2019.

The group, which runs high-end chains Sofitel and Pullman, as well as budget ones such as Ibis, added that it saw an improvement of about 5 points in RevPAR every month since April and a similar trend this month.

First-half revenue fell 6% on a like-for-like basis to 824 million euros.

Accor confirmed the recurring cost savings of 200 million euros as part of the plan announced last year to mitigate the impact of the pandemic, adding that its EBITDA should benefit from a positive impact of 70 million euros this year.

The group said 93% of its hotels were now open, compared with 87% in April.

It refrained, however, from offering a definite outlook for the year, confirming average monthly cash burn at less than 40 million euros.