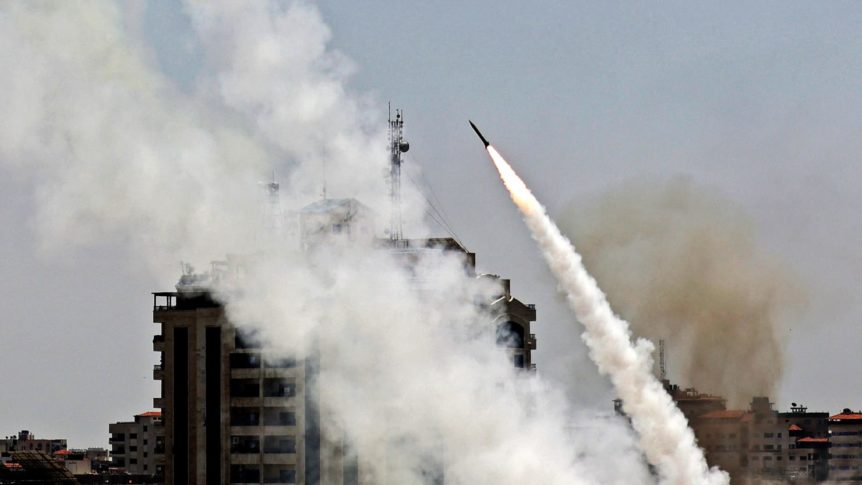 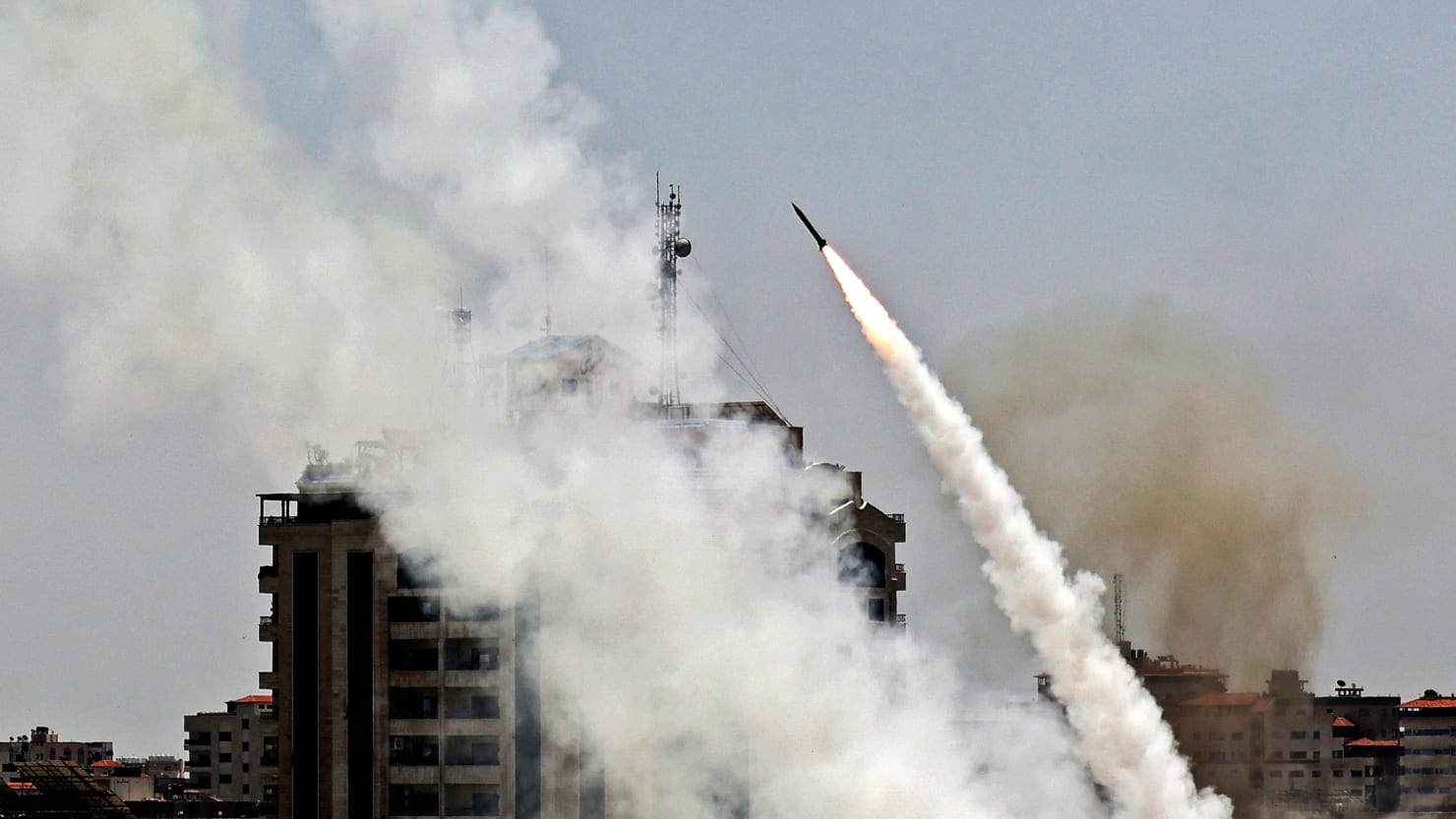 While the blockade—which includes restrictions that start with the Red Sea and run through Sudan and Egypt—has succeeded in hindering Gaza’s civilian economy, militant groups including Hamas and Islamic Jihad claim to have successfully relied on local experts to develop rockets using homegrown resources.

One such expert was Dr. Jamal al-Zabada, an American engineer who was assassinated on May 12, when Israeli forces targeted a tunnel where al-Zabada and other first-rank militant leaders had been holed up. Al-Zabada, a former university professor, had reportedly recruited his son Osama and a number of engineers to develop Hamas’s arsenal using primitive resources readily available in the besieged enclave. This proved to be a significant development in the last bout of violence, especially in comparison to the 2014 war.

That’s not to say that the capabilities of Gazan militants in any way measure up to Israel’s arsenal: Israeli airstrikes devastated Gaza in May, destroying countless buildings and killing over 200 Palestinians living in the strip. But militant groups have learned to make do with what they have—hurling thousands of rockets toward Israel, the vast majority of which were intercepted by the Iron Dome defense system.

“The materials used in the manufacture of missiles locally are very simple,” Daoud Shehab, a spokesperson for the Gazan militant group Islamic Jihad, told The Daily Beast. “Some of it was obtained through the leftovers of Israeli bombing, or by taking some measures to provide these materials from the soil and from natural materials.”

Gazan military analyst Ibrahim Habib said that despite the siege on the enclave, preventing the entry of iron and building materials, militants were able to recycle large quantities of iron pipes from the ground—the remnants of Israeli settlements that were evacuated during the Sharon era in 2005, in what was described as a unilateral withdrawal from Gaza.

Habib noted that militants relied on other, older alternatives discovered in the strip. “The two sunken warships discovered by the resistance on the coasts of Gaza were one of the important sources of explosive materials,” he said, referring to reports of Hamas recovering shells from sunken World War I ships last year. “They were extracted with difficulty. But they constituted an additional lever for the resistance’s capabilities and strengthening its orientations, possessing high explosive warheads.”

“The security and intelligence battle is parallel to the military battle.”

Habib added: “With the passage of time, the resistance has acquired the experience and skill that enables it to dismantle the unexploded missiles during the past wars, which are not few, and it has become another source for obtaining explosive materials and then recycling them.”

Adding to that, militants reportedly received specialized training from outside the Gaza Strip—especially from Iran—which helped them manufacture missiles and drones that were launched at Israel in the last war. The head of Hamas’ political bureau, Ismail Haniyeh, declared in May that the group had won this round of fighting with Israel following news of the ceasefire—and specifically thanked Iran for its continuous support.

“The major countries around the world support Israel, and that is why we resort to relying on ourselves and some of our friends in the Islamic world to develop our capabilities as much as possible,” said Shehab.

In the last war, Gaza’s militant factions kicked off a round of attacks by firing rockets at Israel on May 11, in response to attacks on Al-Aqsa mosque and clashes in East Jerusalem’s Sheikh Jarrah neighborhood, where several Palestinian families face forced evictions from their homes.

It was clear that the missiles launched from Gaza were part of a pre-planned military strategy. The sheer number of rockets, its high ranges, and the intensity of the fire were decisive factors in the confrontation—setting it apart from previous wars it fought from Gaza, and suggesting that militants have worked to develop their stock of missiles.

“When Israel admits to bombing more than 4,000 rockets from the besieged Gaza, in my estimation, it affirms the capabilities of the resistance and the good manufacturing of weapons inside the strip,” military expert and retired West Bank general Wassef Erekat told The Daily Beast.

After the latest round of clashes, the intelligence war has continued with Israel seeking to learn more about Gaza’s weapon development capabilities. While Hamas spokesperson Abd al-Latif al-Qanou would not comment directly on the group’s sourcing of materials for developing weapons, he told The Daily Beast that “Israel has tried to recruit many agents and spies, so the security and intelligence battle is parallel to the military battle,” and acknowledged that “Hamas’ military capabilities do not match to what the Israeli army has.”

The Israeli army has begun to use quadcopters—small, electronically controlled drones capable of conducting intelligence-gathering operations such as the monitoring and tracking of fixed and moving targets. Dozens of Israeli quadcopters hovered in the skies of the Gaza Strip during the dawn hours of June 4, and Gazan military factions have managed to shoot a number of them down

A Gazan official affiliated with Hamas said that Israeli aircraft have managed to infiltrate deep into the Gaza Strip, to places heavily populated by Hamas. “Israel aims to renew its targets… and it also seems that it was seeking to carefully monitor the movements of the resistance after the war,” he told The Daily Beast.

He added: “Israel clearly started using this type of aircraft during the return marches that were launched on the Gaza border in 2018, and used them in other tasks such as assassinating leaders of the resistance factions and monitoring their information.” The official explained that these planes “are characterized by their ability to reach targets in narrow places that are very difficult to reach through normal planes or people, as well as their flexibility, ease of movement and low sound.”

It seems that despite the severe blows that Israel inflicted on Hamas in the last war, including the assassination of several leaders and the bombing of military sites—the information war between Gazan militants and Israel remains ongoing, as both parties gear up for another inevitable round of fighting.

“We do not seek more wars, but what do we do if the world encourages Israel to kill by providing it with weapons and bombs?” Shehab told The Daily Beast. “We will use our right to defend ourselves, and we have the ability to do so even if with stones.”