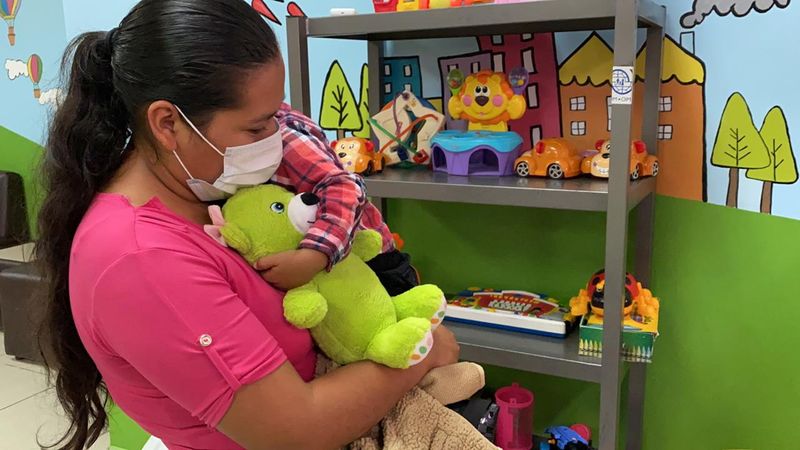 Lorena Garcia, 23, carries her two-year-old son Wilder, who was found alone in June near a cargo truck that carried dozens of migrants making their way through Veracruz state to the U.S. border with Mexico, after being reunited at the Directorate of Children, Adolescents and the Family (DINAF), in San Pedro Sula, Honduras July 16, 2021. Honduras’ Presidency/Handout via REUTERS

By Gustavo Palencia and Lizbeth Diaz

TEGUCIGALPA (Reuters) – A toddler who made international headlines when he was found alone in Mexico after a harrowing attempt to reach the United States was reunited with his family in Honduras on Friday, his mother said.

The boy’s mother, Lorena Garcia, 23, said she hugged her two-year-old son Wilder tightly when she met him in the northern Honduran city of San Pedro Sula where he arrived by plane after spending nearly 20 days in the custody of Mexican authorities.

Wilder’s plight received international media attention after he was found alone in June near a cargo truck that carried dozens of migrants making their way through Veracruz state to the U.S. border with Mexico. Mexican security agents found Wilder half naked and surrounded by trash.

“I am happy to see Wilder again. I have suffered a lot with what happened,” Garcia told Reuters by phone after traveling six hours from her village to meet her son. “I am not putting him at risk anymore.”

Mexico’s National Migration Institute confirmed in a statement the boy was transferred to the care of Honduran officials on Friday with the intention of bringing him to his family.

The agency shared photos of the child, who appeared healthy, being carried by a Mexican migration officer along with a group of other children who were also on their way to be reunited with their families.

“We have a chicken soup for him for dinner, he loves that soup,” Garcia said. Ten other relatives, from grandparents to uncles, were gathered at the family’s house awaiting Wilder’s homecoming.

Garcia had said Wilder and his father had left the family’s home in Copan near the border with Guatemala in a bid to reach the United States and secure work. The father and son were traveling with a human smuggler- or coyote- before Wilder was found alone by Mexican authorities, Garcia said.

Wilder’s father is being held at an immigration center, she told Reuters.

There has been an increase this year in unaccompanied children, mainly from Central America, arriving at the U.S.-Mexico border, even as the administration of President Joe Biden warns migrants not to come.

Migrants who cross Mexico to reach the United States, many of whom are fleeing violence and poverty in their home countries, often face a perilous journey with the risk of kidnappings, killings and other violent crime.

(Reporting by Gustavo Palencia in Tegucigalpa and Lizbeth Diaz in Mexico City, writing by Cassandra Garrison)