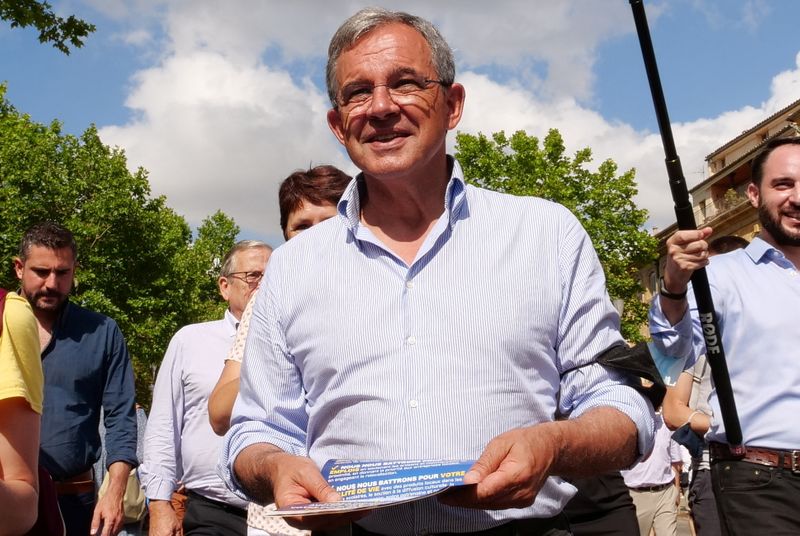 AIX-EN-PROVENCE, France (Reuters) – With a long career in mainstream politics behind him, Thierry Mariani, who wants to secure the first ever regional election win for the far right in France, is in his element as he canvasses for support in Aix-en-Provence.

His shirt sleeves rolled up, his manner laid back, Mariani pitched himself as the man who would put more security agents on trains and in high schools, spend more money on the pandemic recovery and involve the public more in decision making.

Far-right leader Marine le Pen recruited Mariani, an experienced politician who served as minister under Nicolas Sarkozy, to widen her appeal among traditional voters in her push to win control of Provence-Alpes-Cote d’Azur (PACA).

“He’s the only one with an honest programme,” pensioner Claire Laurent, who voted far right for the first time in the election’s first round, said in the market where Mariani was handing out campaign leaflets.

“We need to defend our region with a solid candidate,” she said.

Capturing the Mediterranean region of 5 million people in the June 27 second round vote would bolster Le Pen’s chances of becoming president next year and be a gauge of the progress made softening her party’s euro-sceptic, anti-immigration image.

Renaud Muselier, the centre-right incumbent president of the region, has cautioned voters during the campaign not to be duped by a “Trojan horse”. He told Reuters that behind a less toxic facade, the far right continued to push “nauseating” policies.

The south of France has for years been a bastion of right-wing support.

It is underpinned by anger over waves of immigration from France’s former North African colonies and with it the perceived threat to French identity. More recently, a feeling that taxes are helping migrants rather than tackling social inequalities has fanned support among the working class.

“I’m not one to be racist, but look at what’s happening. We have to stop handing out benefits all over the place because at some point it’s us who will have to pay,” said mechanic Jean-Paul Buleux, a far-right voter.

The odds of a far right victory in PACA lengthened this week after other parties united in a so-called ‘republican front’ designed to avoid fragmenting the anti-Le Pen vote. The same front helped President Emmanuel Macron defeat Le Pen in 2017.

For voters like Buleux, the pact underlines what they say is a fear the traditional parties hold for the change many seek.

For others like pensioner Gerard Bouzart, who spoiled his first round ballot, it protects the republic’s core values of equality and freedom.

“I’ll vote to block out the Rassemblement National (in the second round),” the pensioner said, lampooning the far right’s stance on immigration and gay rights. “Their ideas are from another era.”

Mariani rejected the idea the party was a danger to the republic. He said the Rassemblement National had left behind its anti-Semitic, xenophobic past associated with its founder Jean-Marie Le Pen.

“Marine Le Pen is nothing like her father,” he said.

Marine Le Pen said the outcome of the regional elections would not change her course. Le Pen’s party in the first round lost nine percentage points nationwide compared to the 2015 regional elections, coming top only in PACA.

But the elections have underlined a challenge she will face going into the 2022 presidential election, according to political scientist Virginie Martin.

“There’s a delicate balance to strike: be able to say ‘we’re different, vote for us because were outside of the system’ but be sufficiently within the mainstream to be credible,” Martin said.