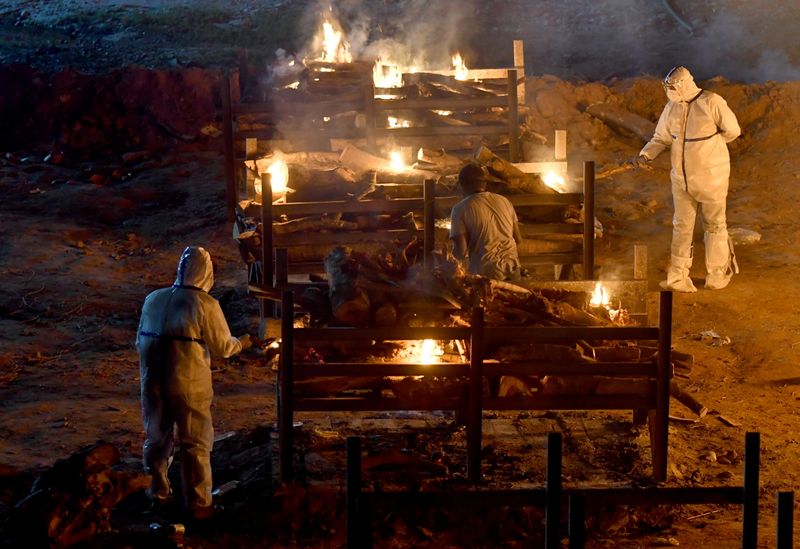 FILE PHOTO: Relatives cremate the bodies of persons who died due to the coronavirus disease (COVID-19), at a crematorium ground in Giddenahalli village on the outskirts of Bengaluru, India, May 2, 2021. REUTERS/Samuel Rajkumar

By Ankur Banerjee and Neha Arora

(Reuters) – India’s excess deaths during the COVID-19 pandemic could be as high as 4.9 million, according to a new study that provides further evidence that millions more may have died from coronavirus than the official tally.

The report by the Washington-based Center for Global Development, co-authored by India’s former chief economic adviser Arvind Subramanian, included deaths from all causes since the pandemic’s start through June 2021.

India has officially reported more than 414,000 deaths due to COVID-19, the third highest tally in the world after the United States and Brazil, but the study adds to growing calls from experts for a rigorous nationwide fatality audit.

A devastating rise in infections in April and May, driven largely by the more infectious and dangerous Delta variant, overwhelmed India’s healthcare system and killed at least 170,000 people in May alone, according to official data.

“What is tragically clear is that too many people, in the millions rather than hundreds of thousands, may have died,” the report said, estimating the excess death toll during the pandemic at between 3.4 million and 4.9 million.

The report did not ascribe all the excess deaths to the pandemic.

“We focus on all-cause mortality, and estimate excess mortality relative to a pre-pandemic baseline, adjusting for seasonality,” it said.

India’s health ministry did not immediately respond to a Reuters email seeking comment.

Some experts have said excess deaths are the best way to measure the real toll from COVID-19.

The New York Times said the most conservative estimate of deaths in India was 600,000 and the worst case scenario several times that number. The government has dismissed those figures.

Health experts have said the undercounting is largely because of scarce resources in India’s vast hinterland where two-thirds of the population lives, and because many have died at home without being tested.

India has reported a decline in daily infections from a peak in May, logging its lowest daily count in four months on Tuesday at 30,093 fresh cases.

Prime Minister Narendra Modi’s government has also been criticised for a messy vaccination campaign that many say contributed to the worsening of the second wave of infections.

India has so far only vaccinated just over 8% of eligible adults with the mandatory two doses.

In July, the government administered fewer than 4 million doses per day on average, versus a record 9.2 million doses on June 21, when Modi flagged off a campaign to inoculate the country’s 950 million adults for free.

(Reporting by Ankur Banerjee in Bengaluru and Neha Arora in New Delhi; Editing by Clarence Fernandez and Giles Elgood)