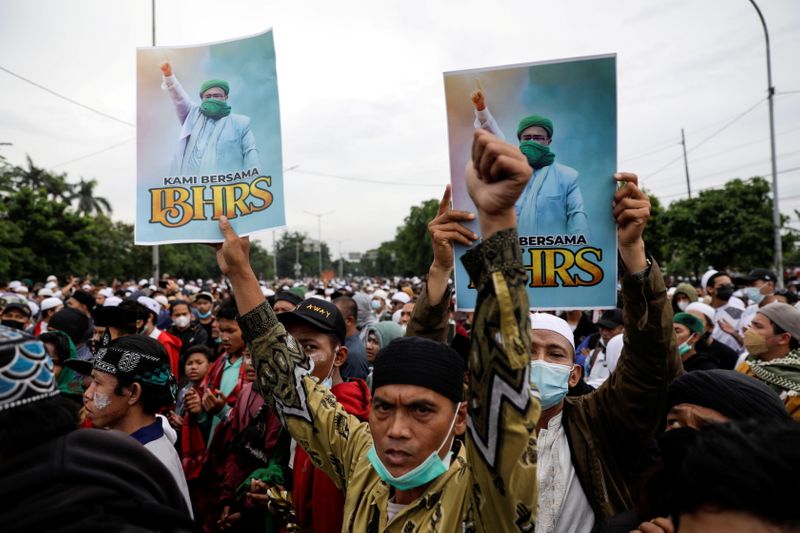 JAKARTA (Reuters) – An Indonesian court jailed hardline Islamic cleric Rizieq Shihab on Thursday for four years for spreading false information in a video saying he was healthy despite having tested positive for COVID-19.

The verdict comes after an eight-month jail term handed last month to Rizieq, the spiritual leader of the outlawed Islamic Defender’s Front (FPI), for breaching coronavirus curbs over several mass events, including his daughter’s wedding, which was attended by thousands.

Prosecutors had called for a six-year sentence in the latest case after Rizieq was charged over the video, posted on the YouTube channel of the hospital where he was being treated for the coronavirus.

In a streamed broadcast, Judge Khadwanto said Rizieq was guilty of “announcing false information and purposefully causing confusion for the public.”

Indonesia passed the 2 million mark in coronavirus cases on Monday, as authorities announced a tightening of restrictions to contain the spread in the world’s fourth most populous country. Deaths from COVID-19 now total 55,594.

Hundreds of Rizieq’s supporters had gathered outside the East Jakarta court amid heavy guard by police and video footage showed some scuffles.

Shortly after being sentenced, Rizieq told the court he rejected its ruling and would contest it.

Rizieq’s supporters and legal team have said the cases are politically motivated efforts to silence the cleric, who has a large and vocal following in the world’s biggest Muslim-majority country.

He returned last year from self-imposed exile in Saudi Arabia, where he had fled while facing charges of pornography and insulting the state ideology, both later dropped.

The FPI had become politically influential in recent years, and was among several Islamic groups that staged rallies in 2016 to bring down Jakarta’s then governor, a Christian, on charges of blasphemy.

The mass protests stirred deep anxiety within the government of President Joko Widodo about a perceived Islamist threat.