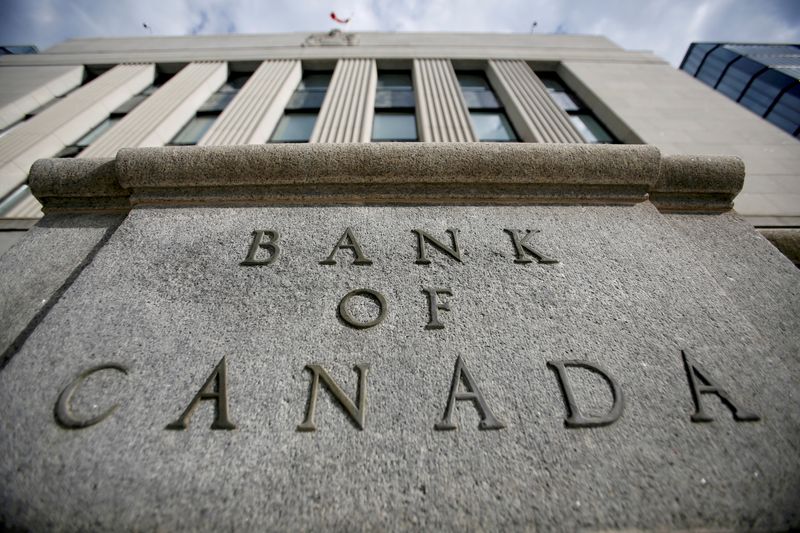 FILE PHOTO: A sign is pictured outside the Bank of Canada building in Ottawa, Ontario, Canada, May 23, 2017. REUTERS/Chris Wattie/File Photo

TORONTO (Reuters) – The Bank of Canada’s pledge to let the economy run hot could be tested by inflation that’s already at a decade-high level, with more price increases expected as businesses shuttered during the COVID-19 pandemic reopen and consumers dip into record savings.

The Canadian central bank says the current inflation pressures are due to temporary factors, such as supply constraints and the comparison to prices from a year ago, when the economy was reeling from the pandemic, and that inflation will ease back to its 2% target by 2022.

It has signaled that its benchmark interest rate will be kept at a record low of 0.25% until at least the second half of 2022, planning for demand to temporarily exceed supply in an effort to boost employment more than in past economic recoveries.

But some economists worry that Canada’s inflation, which was 3.6% on an annual basis in May, could be more stubborn than expected, particularly because parts of the services sector, which accounts for about 70% of the economy, are only just reopening.

If inflation lingers it could raise expectations for price increases. That’s a situation that tends to be a game changer for central banks because actual inflation is linked to what people expect it to be.

For instance, businesses and households often take into account the expected rate of inflation in wage negotiations and the setting of goods prices, as happened in the 1970s and early 1980s when inflation soared in Canada.

“If you get a little more persistence (on inflation), especially in the early part of 2022, maybe things aren’t quite as transitory as people think,” said Benjamin Reitzes, Canadian rates and macro strategist at BMO Capital Markets.

The Bank of Canada “runs the risk that expectations change and they run afoul of their target,” Reitzes added.

Consumers’ expectations for inflation one year from now have already climbed above 3% and inflation expectations among firms have climbed to a near-record high, BoC surveys showed this month.

Updated weights to the basket of goods and services in the Consumer Price Index, representing consumer spending patterns during the coronavirus pandemic, could give another bump to inflation. The new weights are due to be reflected in the June inflation report on Wednesday.

Meanwhile, a significant decrease in COVID-19 infections in Canada in recent months has led to reduced restrictions on travel, hospitality and other high-contact services. About 71% of the country’s population has been vaccinated, a Reuters tally shows.

Pent-up demand for some services and difficulties hiring workers, after border closures stalled the flow of immigrants, could drive a fresh wave of price hikes, including for airline tickets, hotel accommodation and personal services.

Some of those increases are already playing out in the United States, which is further along in its reopening than Canada.

“In those hard-hit services sectors, it is really going to be a question of whether supply can keep up with demand,” said Josh Nye, senior economist at Royal Bank of Canada.

Another consideration is the unprecedented savings accumulated by Canadians during the pandemic due to government support and reduced spending. In 2020, the BoC estimates the extra savings worked out to C$5,800 ($4,613) on average per person.

“There are some upside risks to the consumer spending forecast, depending on how much of that excess savings is deployed and how quickly,” Nye said.

“If that creates such strong demand that businesses in the services sector can’t keep up, then we could see even stronger inflation.”