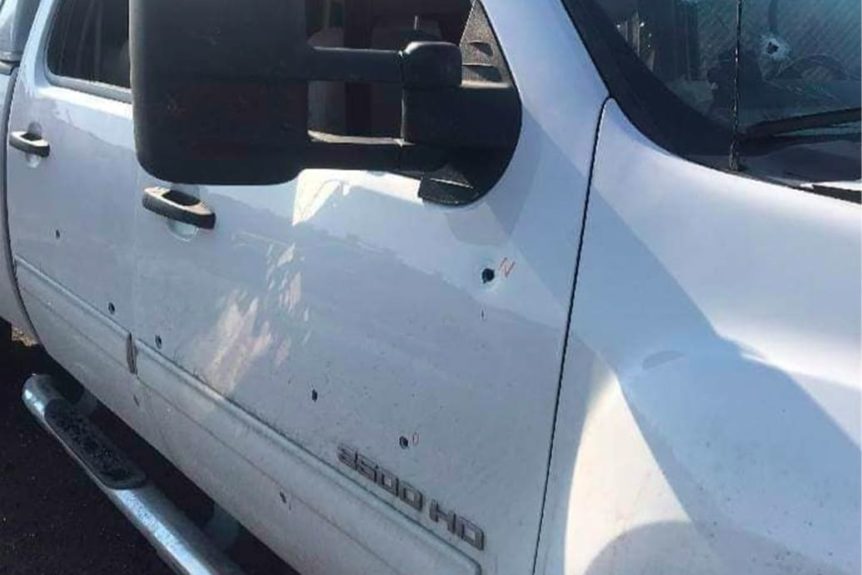 As a raging wildfire burned behind him late last month, Soobleej Kaub Hawj drove a white GMC pickup truck away from his new home in Siskiyou County, a mountainous region in Northern California. The 35-year-old was originally from Kansas City, and had moved there recently to help his family, who are members of a growing 4,000-strong community that includes prolific cultivators of cannabis plants.

It was June 28, and Hawj’s wife and children were in a car behind him. They, too, were fleeing the Mount Shasta Vista Subdivision, where Hawj’s Hmong community—an ethnic group tracing its origins back to China, Vietnam, Laos, and Thailand—has gained a foothold. And where the Lava Fire was wreaking havoc.

According to the Siskiyou County Sheriff’s Office, Hawj traveled down the main road out of the community until he hit an intersection, where officers were stationed. The officers directed traffic north, but according to police, Hawj attempted to go south, ignoring their commands.

At some point, local law-enforcement officials say, the father of three brandished a gun.

Moments later, four officers—one from the Siskiyou Sheriff’s Office, two from the Etna Police Department, and one from the California Department of Fish and Wildlife—shot and killed Hawj, Siskiyou County Sheriff Jeremiah LaRue told The Daily Beast on Tuesday.

A spent .45 casing was found at the scene, according to LaRue, which he believes belonged to Hawj—and indicates he may have also fired at the officers.

“I have no idea why you would do that during an evacuation, but that’s what played out,” LaRue, who also serves as the coroner in the county, told The Daily Beast.

“That’s like asking Robin to investigate Batman. These guys are on the same team.”

Members of the Hmong community in Siskiyou County and across the country have no idea either—and can’t help but suspect foul play by cops in an area rife with tension between immigrant communities and white residents. So far, at least, the national wave of rage over police brutality has failed to shine a light on local law enforcement, critics say, even as hate crimes and other acts of violence against Asian communities have sparked broad outrage.

Advocates and others in the Hmong community hoped body-camera evidence, in particular, would provide much-needed clarity on the fatal episode. But in a statement to The Daily Beast, Kirk Andrus, the Siskiyou County District Attorney reviewing the shooting, said that because of the “instantaneous” nature of the incident, any officers who fired shots and were wearing body cameras did not turn them on.

LaRue did not immediately disclose how many shots were fired, nor how many struck and killed Hawj, citing the need to consult investigators of the incident. One witness to the shooting told the Sacramento Bee that he heard close to 60 shots fired. Pressed for further comment, LaRue did not say if the incident, and the failure to use body cameras, violated the sheriff’s office policies, but said he would be reviewing the shooting.

He also did not share any information about the officer in his agency who fired their weapon.

A spokesman for the Etna Police Department said none of the officers in their department wear body cameras. Of the two officers who fired at Hawj, one has been on the force nine years, while the other has been an officer for just over a year, the spokesman said, declining to offer further details.

The California Department of Fish and Wildlife did not respond to a request for comment.

The revelation that at least one of the cops who shot Hawj had a body camera but did not use it has dismayed advocates who say Hmong people in Siskiyou have been the target of law-enforcement crackdowns on cannabis crops, as well as racist ordinances cutting off their access to water. The trust between the Hmong community in Siskiyou and local authorities is thin, they said, and the thought of the county district attorney making a call on the shooting of Hawj with no video evidence only heightened their skepticism that justice would be served.

“We can’t trust the DA to investigate the Sheriff,” said Tou Ger Xiong, a Hmong national activist from Minnesota who has since met with Hmong leaders in Siskiyou, including Hawj’s family. “That’s like asking Robin to investigate Batman. These guys are on the same team.”

He added that he doesn’t buy the idea that Hawj would have flashed a gun, much less fired at officers, given what he’s been told about the man. But he said that is where body-cam evidence would play a role. “If the body cam reveals that he was pointing a weapon at them, you know what, I would say, ‘Hey, congratulations you did your job,’” he said.

Hawj’s family and their attorney did not respond to requests for comment for this story.

Xiong is one in a chorus of voices who have called for an independent investigation into the shooting; a man from the Siskiyou Hmong community even went so far as to go on a nearly 20-day hunger strike.

In a statement to The Daily Beast, a spokesperson for the California Attorney General’s Office confirmed the agency has been reviewing an influx of requests to look into the June shooting, but said they were not actively investigating it.

Less than a decade ago, Hmong families began to migrate to land in the Mount Shasta Vista Subdivision. The terrain was cheap, rocky, and hard to farm. The land was also frequently decimated by fires, according to Xiong. But Hmong families cultivated and rehabilitated the area, making cannabis one of their staple crops, which community residents say is often sold to legal dispensaries.

“While the sheriff conceded that ‘cartel’ was ‘probably’ not an accurate word to describe the immigrant community, he said they were ‘very organized.’”

Their success at turning a profit on undesirable land in a county of fewer than 50,000 that is 86 percent white and less than 2 percent Asian has drawn significant ire from the white establishment, Hmong people say. Some white people in the area falsely believe the Hmong to be undocumented, when in fact many of them first came to the United States as refugees after fighting alongside U.S. troops in the Vietnam War and mostly settling in California, Minnesota, and Wisconsin.

“They’re neighbors,” Xiong said of the Hmong people in Siskiyou and the largely white population surrounding them, “but nobody has really bridged these cultural divides.”

Tong Xiong, 37, a Hmong Siskiyou resident who has lived in the area for nearly four years, said he’s noticed more hate and local government action against the community over the past half-decade.

He pointed specifically to a series of ordinances passed by the Board of County Supervisors in 2020 and 2021 that made it illegal to use groundwater to cultivate marijuana, and prohibited the transport of large amounts of water on roads that lead to the Hmong community. He argued the ordinances target the Hmong subdivision, which does not have the same access to wells and water as other communities.

The ordinances led to a federal civil-rights lawsuit that was filed against the board and Sheriff LaRue on June 4. Allison Margolin, an attorney representing Hmong citizens in the case, called the ordinances “obvious de facto violations of civil rights.” But Ray A. Haupt, a Siskiyou Supervisor, told The Daily Beast the ordinances were not designed to target the Hmong people, and rather to “combat organized crime and criminal cartels operating in our county.”

Xiong, the Siskiyou resident, said the ordinances, the cartel labeling, and frequent enforcement actions by the Sheriff’s Office were just a way for the county to target the Hmong community with the goal of pushing them out.

He added that although there were growing operations in the Hmong community that may be operating outside of county or state rules—growing weed is legal in California, but local laws in Siskiyou County limit residents to growing 12 plants per household and do not allow plants to be grown for commercial use—he doesn’t understand why the Sheriff’s Office spends resources policing their small subdivision.

“The only people that have been targeted are Asians,” Xiong claimed.

The shooting of Hawj last month, he added, was a breaking point, leading to protests of 300 people, according to the Mount Shasta Herald, and demands from the community to be treated fairly. “The shooting is what draws the line,” he told The Daily Beast. “That’s where we say enough is enough.”

LaRue said he understood protests breaking out over Hawj’s death, but that the use of “charged words” to describe his agency’s interactions with the Hmong community in the past was disheartening. “Because it’s not real. It’s their perception of it, but it’s not the reality of what we’re trying to do,” he told The Daily Beast.

According to LaRue, his 40-member office serves about 150 search warrants for illegal growing operations in the county each year, and the majority of those warrants in recent years have been served in the small Hmong community. Not because of their race or ethnicity, he added, but because of the size and scale of their operations on the 20-square-mile plot of land—which he said far exceeded the number of plants citizens are allowed to grow on their property.

“If one of the main freeways where you live is having certain traffic issues, you focus on where the problem is,” he said. “Because of the size of this thing, and the illegal activity, that is why we primarily have to attack the criminal element of it.”

While the sheriff conceded that “cartel” was “probably” not an accurate word to describe the immigrant community, he said they were “very organized” and that he believes they have systems to work together to keep their illegal cultivation of marijuana going, despite the search warrants and raids. The city ordinances, he continued, were designed not to cut off their drinking water, but to slow down the use of water for cultivation in a county that frequently experiences droughts.

For his part, Xiong, the area resident, said LaRue has frequently made these arguments to justify his actions in the county. “That’s what he always says,” he told The Daily Beast.

He argued that the alleged targeting of their community and the ordinances have only turned the county even more sharply against the Hmong people. Which is why he and others believe they need outside eyes to bring justice after Hawj’s killing.

“He’s always painted us as dangerous people,” Xiong said of the Sheriff. “That’s how others view us now.”

LaRue said he welcomed an outside investigation, even as the path to launching one—County Attorney Andrus did not respond when pressed on the matter—was unclear.

“I personally don’t have anything against anybody,” Sheriff LaRue said. “Send all the people you want.”