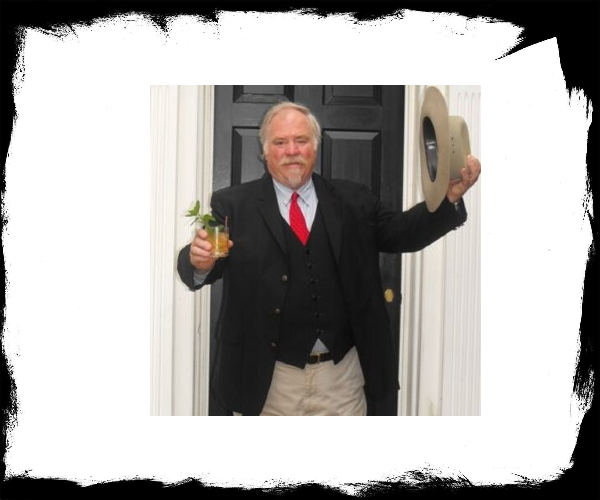 Michael Masters is a Kentucky Colonel, the highest honor awarded by the Governor of Kentucky for noteworthy accomplishments and community service to Kentucky and the United States.

Colonel Masters is a descendant of a relative of Daniel Boone, who was the first European settler in Kentucky.

After decades as an executive working for national food and beverage companies, he reclaimed roots in Bardstown, a small little historic town where Jesse James hid when on the run, My Old Kentucky Home State Park of Stephen Foster’s ballad fame is located, and where many of the old bourbon distiller families still live.

He ran Bourbon University out of one of his historic properties in town: it offered an opportunity for tourists and foodies to sample rare beverages, learn about their characteristics, enjoy homemade paired Southern food and have a party like days of yore.

He’s also a spellbinding author; check out his book on Amazon. Masters has appeared on television many times, including with Paula Deen. He’s pared down his projects to running “un-hosted” bed and breakfasts in historic and sumptuously restored cottages.

I’ll never forget when the Colonel pronounced my dad – long gone now – a “Kentucky Gentleman” when he visited Bardstown. Colonel Masters and I chatted by phone, which we have done for decades.

What are your latest projects?

We have six inns, all in historic Bardstown. They can be extended stay, they’re for tourist travelers.

They’re un-hosted. I tell you, people will come from all over the world to have a drink with me.

I can’t tell you how many interesting people that I’ve met. I always say, ‘I got to entertain interesting men and beautiful women.”

How many people have you ever heard of hugging the owner of a restaurant? You never do! Never do!

With the women, I would kiss their hand, because I’m a big ham. I really played on the Southern Gentleman part. We packaged “Southern hospitality” and sold that!

Everything I did was the first in the area. With Bourbon University, I served all the brands, not like the distilleries.

I saw myself as an ambassador to the industry.

I know you won’t name your favorite bourbon, but I (also) know that you’re not a wheated bourbon man.

Yes, wheated bourbons are a little soft for me. I like a 100 proof, good proof, like Old Forrester, Knob Creek.

I like Knob Creek, too! My HVAC guy’s favorite bourbon is George (T.) Stagg, I gave him some.

I don’t make a steady diet of it. My son and I will have a glass of it, we won’t have a second.

You could get drunk!

You’re not a cocktail man, are you?

I like some of the other liquors, I love a gin and tonic, especially this time of year.

Vodka is not distinctive enough for me. I’ll have a gin martini.

I know you have lots of bourbons and bourbon tchotchkes. Do you have plans for them?

I’ll share the bourbon with friends. I’m ggoing to enjoy them until the day I die! My son has a bar and pizza place in Danville. I’ll give them to him. My style is to gather a friend or two or three for bourbon and talk about it. I never bore them.

Who made you a Colonel?

The Colonels don’t judge anybody. You salute the things of Kentucky.

It’s about fellowship and good times. There are more women than men.

I feel blessed that I have been able to spend time with the Colonels.

From his book, Hospitality – Kentucky Style: