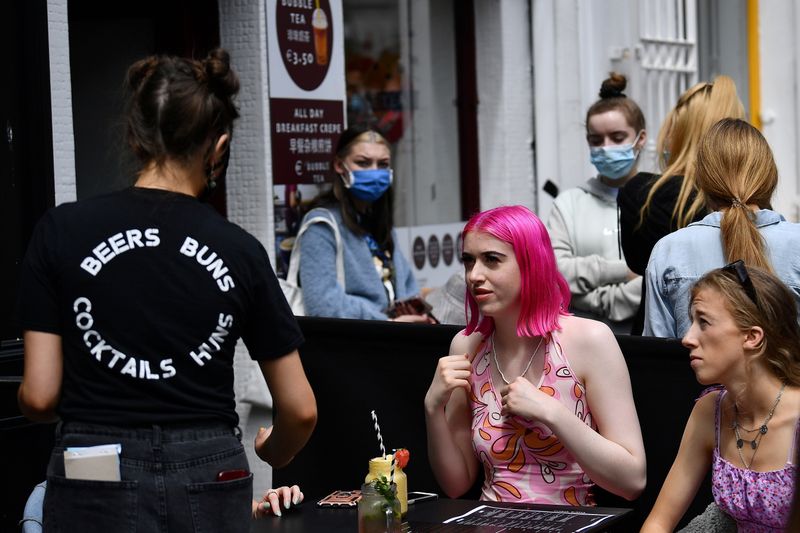 By Conor Humphries and Graham Fahy

DUBLIN (Reuters) -Ireland said on Tuesday it will restrict indoor drinking and eating in bars and restaurants to those who are fully vaccinated against COVID-19 or who have previously been infected by it due to concerns about the Delta variant.

The country joins a handful of places in Europe to introduce the measure, including Austria, Denmark and Israel, while Moscow has brought in similar restrictions.

Irish Prime Minister Micheal Martin, who announced a general slowdown of the easing of public health restrictions, said that health officials told him they thought that the variant made indoor hospitality too dangerous for the unvaccinated.

“The safest way to now proceed with a return to indoor hospitality is to limit access to those who have been fully vaccinated or have recovered from COVID infection,” Martin said.

Only 41% of Ireland’s adult population has been vaccinated, with 65% having received one dose, the health minister said on Monday. A senior health official earlier this month said some in their 20s may have to wait until September for a first dose.

Deputy Prime Minister Leo Varadkar said that the only other option to a vaccine verification system which had been presented to the government by Irish health officials was closing indoor hospitality for the foreseeable future.

“The alternative is not a delay of a few weeks … the alternative is a prolonged delay until we reach herd immunity, and with new variants very likely, we just cannot say when that would be,” Varadkar told a press briefing.

Varadkar said that while people would “feel it is divisive, that they are being left outside”, the government felt it was the least bad option.

Bars, restaurants, and cafes have been closed in Ireland for much of the past 16 months, with the latest national lockdown in place since late December. Outdoor dining and drinking has been allowed since June 7. The country also has some of the strictest travel restrictions in the European Union.

Ireland has the fifth highest rate of COVID-19 infections of the 31 countries monitored by the European Centre for Disease Control.

Martin said indoor dining would now not be reopened on Monday as planned but would be delayed until a new system of vaccine certification has been implemented.

Health Minister Stephen Donnelly said the details of the verification had not been finalised but might involve a QR code readable by a smartphone.