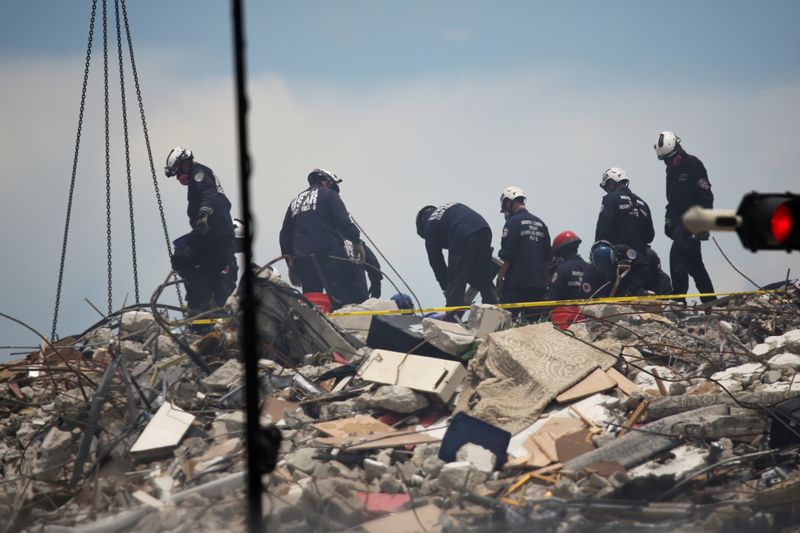 (Reuters) – The Israelis come trained by war. The Mexicans, by natural disaster.

Search-and-rescue teams from Mexico and Israel have joined the phalanx of local firefighters and other specially trained experts combing the rubble for survivors where a residential high-rise collapsed near Miami on Thursday, killing at least nine people with about 150 still missing as of Sunday.

When it comes to collapsed buildings, there is a cadre of international rescue workers willing to cross borders at a moment’s notice. Many from the Miami-Dade County team have experience abroad themselves, notably during a devastating earthquake that struck Haiti in 2010.

The cooperation reflects the international nature of the Miami area, which is home to both Jewish and Latin American diasporas. Official briefings are delivered in Spanish and Haitian Creole in addition to English. Among those missing are relatives of Paraguay’s first lady.

The exact roles of the Mexican and Israeli teams have not been detailed. Local officials say they have plenty of help on hand and are rotating the rescue teams to keep personnel fresh. If nothing else, the international presence is symbolic and may offer some solace, particularly to the local Jewish community.

“We did get a small team from Israel to come. A lot of the families who have unaccounted-for loved ones, wanted that,” Florida Governor Ron DeSantis told a news conference on Sunday.

More than two dozen of the missing were Jewish and had links to Israel, according to an Israeli official.

“It’s really painful,” Maor Elbaz-Starinsky, the consul general of Israel in Miami, told WPLG television. “I for one can identify (with the families), from the Israeli experience.”

Mexico’s “Topos,” the Spanish word for moles, are treated like heroes at home, earning fame for burrowing into piles of rubble in disasters the world over, including the 2001 attacks on the World Trade Center in New York City.

They were on the ground in Florida on Friday, a day after the disaster, Miami-Dade officials said.

The Topos formed as a volunteer search-and-rescue group in the aftermath of a massive earthquake that devastated Mexico City in 1985, saving lives in the working-class neighborhood of Tlatelolco where there had been a poor government response.

They became known as fearless workers, putting their lives at risk to help others and traveling to disasters as far afield as Haiti, Nepal and the Philippines.

After a 2017 earthquake that leveled parts of Mexico City, they carried out their job before hundreds of people who gathered around destroyed buildings.

Easily spotted by their bright jumpsuits and helmets, they would be greeted with cheers and applause when arriving at a scene. But the crowds would also turn silent when asked, at moments when the rescuers needed quiet to listen for any buried survivors.

The Israeli rescuers come from the Israeli Defense Forces, the country’s military, including about 10 reserve officers from the Home Front Command, along with Foreign Ministry personnel, the IDF said in a statement.

Nachman Shai, Israel’s minister for diaspora affairs, tweeted a picture of himself meeting with U.S. officials and the rabbi of the local synagogue near the disaster scene.

Charles Burkett, the mayor of the Miami suburb of Surfside where the disaster struck, described a meeting between the Israelis and families of the missing.