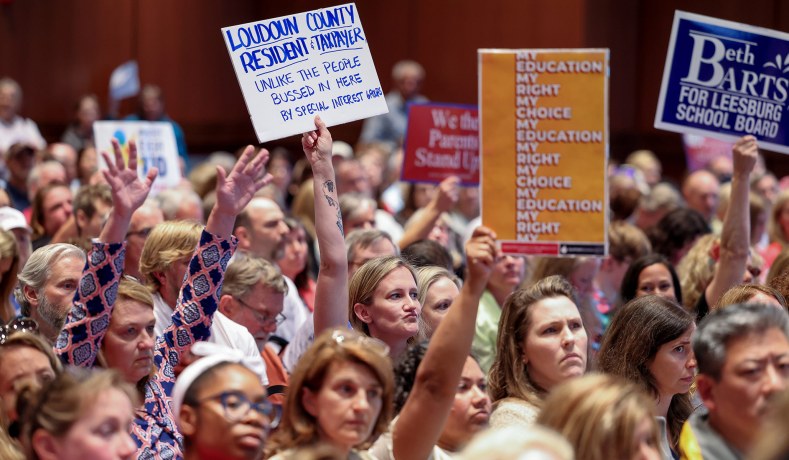 A long report from Politico out this morning reveals that the ongoing discontent over critical race theory in public schools isn’t confined to conservative or right-leaning parents. In reality, parents across the political spectrum have a host of complaints about what’s going on in public schools these days, including the recent push for including CRT’s controversial tenets and arguments in public-school curricula.

Here are a few key details from the piece:

On the national level, Democrats have insisted that the brush fires over critical race theory — which has become a political punching bag even for unrelated equity initiatives — are largely the work of right-wing activists who willfully misrepresent what it means, and they blame Fox News for fanning parents’ anger.

“That’s another right-wing conspiracy. This is totally made up by Donald Trump and [Republican candidate for governor] Glenn Youngkin,” Virginia gubernatorial candidate Terry McAuliffe said in June.

“I don’t think we would think that educating the youth and next and future leaders of the country on systemic racism is indoctrination,” said White House press secretary Jen Psaki in May.

But those Democrats appear to be underestimating parents’ anger in places where critical race theory is top of mind. Objections to new equity plans are not the sole province of conservatives but extend to many moderate and independent voters, according to POLITICO interviews with school board members, political operatives and activists in Democratic and left-leaning communities including the Northern Virginia suburbs of Washington, D.C.; Palm Beach County, Fla.; New York’s Westchester County; Maricopa County covering Phoenix, Ariz.; and suburban Detroit.

These regions are hardly hotbeds of conservatism, yet what Politico discovered talking to experts and parents in these areas disrupts the hardened left-wing narrative about who exactly is getting so upset over CRT — and what exactly upsets them so much about it.

One parent who lives outside Detroit told Politico she first began learning about CRT because her daughter had begun to argue that the police should be defunded and that the looting during Black Lives Matter protests was justified. She mother said she has voted Democrat but can’t continue doing so “in good faith” and called her daughter’s views radical. Along with other parents, she started a group to confront the local school board about CRT in schools.

Over in Loudoun County, Virginia, where I grew up, six members of the local school board are facing recall elections — and all of them are backed by the local Democratic Party. If CRT continues to be a major issue in the area, it could threaten the last few years of success that left-wing candidates have had in Loudoun, which has historically been a swing district.

In addition to complaints about curricula becoming too progressive, parents in the suburban areas Politico studied complained about drawn-out school closures and school boards that focus too closely on diversity. Another interesting anecdote from the piece:

Bion Bartning, a self-described independent and co-founder of Eos lip balm, became involved in the debate over critical race theory after his daughters’ private New York City elementary school began implementing changes that included telling students in a video to “check each other’s words and actions” for bias.

“That’s the opposite of what you want to tell a 5-year-old,” Bartning, who is of mixed race, said in an interview. “I grew up with very liberal values, and believing in the goal where we judge each other by our character and not by the color of our skin.”

According to Politico, parents are especially upset that their various complaints are being dismissed as just being “anti-CRT,” or, worse yet, that their opposition to CRT is being written off as merely not wanting students to learn about racism. As most good reporting has found since this controversy first arose, hardly anyone on the left or right is complaining about CRT because they’d prefer students not to learn about slavery, racism, or the history of racial conflict in the U.S.

And as this report shows, left-wing proponents of CRT will have to grapple with the fact that it isn’t just conservatives who have a problem with their program.