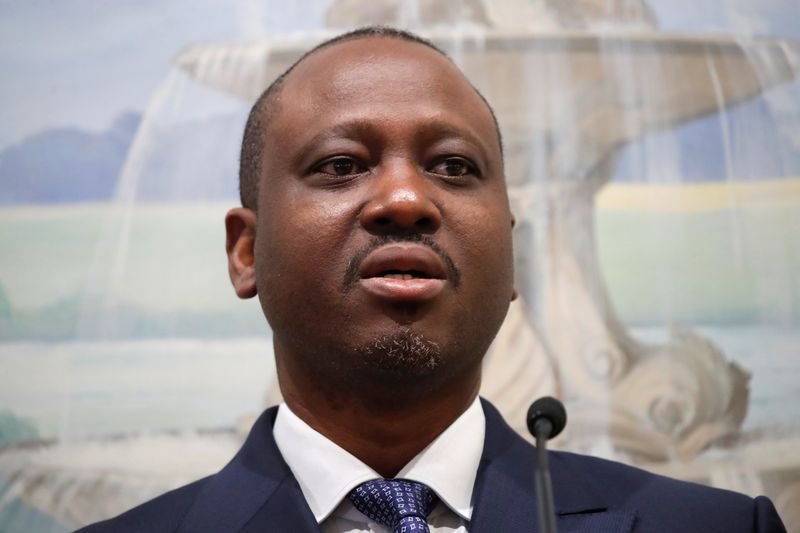 ABIDJAN (Reuters) -An Ivory Coast court on Wednesday sentenced former prime minister and rebel leader Guillaume Soro in absentia to life in prison on charges of plotting a coup against his former ally President Alassane Ouattara.

Soro, who is in exile in Europe, was charged with conspiracy and an attempted attack on state authority. He has repeatedly denied the charges and denounced them as politically motivated.

“This trial has demonstrated once again the corruption of the Ivorian judiciary and its wilful submission to the diktats of the executive,” Soro said in a statement after the verdict.

The case has raised tensions in a country still recovering from a brief civil war a decade ago, during which Soro led the rebels that swept Ouattara to power after a disputed election.

Soro went on to serve as prime minister and speaker of parliament under Ouattara, but the two men later fell out as the president made clear he would oppose Soro’s own presidential ambitions.

Prosecutors issued an arrest warrant for Soro in December 2019, just before he planned to return home from Europe to launch his presidential campaign.

Soro was also accused of stealing public funds, for which he was convicted and sentenced last year to 20 years in prison. He denies those charges too.

The court on Wednesday also handed 20-year prison sentences to several of Soro’s close associates for participating in the coup plot. It dissolved his political party and ordered the seizure of its property and any weapons acquired by Soro and his allies.

Soro used the 2010-2011 civil war and its aftermath to stockpile hundreds of tonnes of weapons, United Nations investigators have alleged. Soro has denied this.