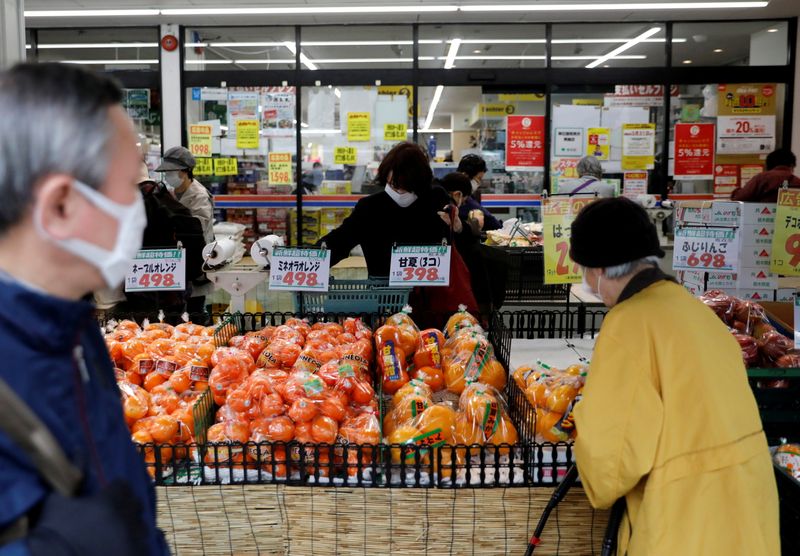 TOKYO (Reuters) -Japan’s core consumer prices rose 0.2% in June from a year earlier to mark the fastest annual pace in over a year, data showed on Tuesday, a sign the impact of global commodity inflation was gradually broadening.

But the increase, driven largely by higher energy costs, was much smaller than that of other major economies due to weak consumption, reinforcing expectations the Bank of Japan will be forced to maintain its massive stimulus for the time being.

The rise in the core consumer price index (CPI), which includes oil products but excludes volatile fresh food prices, matched a median market forecast for a 0.2% gain and followed a 0.1% increase in May.

The increase, which was the fastest since March 2020, was due mostly to a 4.6% rise in energy costs with gasoline prices up 17.9% in a sign households were facing higher cost of living.

Some countries, including the United States and Britain, have seen inflation rise faster than expected as demand recovers from the coronavirus pandemic, triggering debate on how quickly they should wean their economies off stimulus.

With inflation well short of its 2% target, the BOJ is likely to lag well behind its counterparts in dialing back its massive monetary support to underpin a fragile recovery.

While global commodity inflation has pushed up wholesale prices in Japan, consumer prices have barely risen as companies remain cautious about passing on higher costs to households.

From the CPI data for July due on Aug. 20, the government will use a new base year that will lead to tweaks in the weighting of some items consisting the index.

Many analysts project the change to push core CPI back to negative territory due to an expected increase in the weighting of cellphone fees, which have been declining recently.

Mizuho Securities’ Ueno expects the base year change to push down core CPI by around 0.2% point.

A resurgence in COVID-19 infections forced the government to impose new state of emergency curbs in Olympic host city Tokyo from Monday through August 22, dashing policymakers’ hope for a solid rebound in economic growth in July-September.

In fresh quarterly projections released on Friday, the BOJ cut its economic growth forecast for the fiscal year ending in March 2022 to 3.8% from 4.0% due in part to the new curbs.

It revised up this year’s core CPI forecast to 0.6% from 0.1% largely reflecting the boost from higher energy prices.