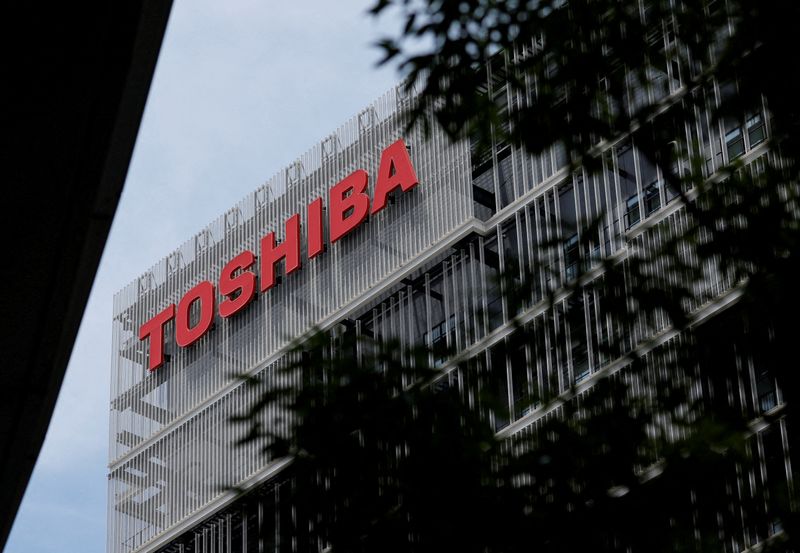 TOKYO (Reuters) -Toshiba Corp on Friday cut its full-year operating profit outlook after a 75% slump in second-quarter profit – dismal results that heighten the uncertainty surrounding its prospects for a buyout deal.

The Japanese industrial conglomerate said its earnings were being hit by a slew of factors including a slump in the hard disk drive market and an appraisal loss on a drop in printer unit Toshiba Tec Corp’s share prices.

It cut its profit forecast for the year ending in March by roughly a quarter to 125 billion yen ($885 million).

Kioxia Holdings Corp, a memory chip maker some 40% owned by Toshiba, has also said it would cut production by about 30% from in October.

The chip market has been hit hard as demand for smartphones and personal computers slides due to sharply higher inflation for many economies, geopolitical tensions and COVID-19 lockdowns in China.

For the July-September quarter, Toshiba posted an operating profit of 7.5 billion yen ($53.2 million). That was far short of a Refinitiv consensus estimate of 36.9 billion yen from four analysts.

The weak earnings outlook could have implications for would-be buyers of the conglomerate, given that, according to sources, Japanese banks are cautious about financing a buyout deal.

A consortium led by private equity fund Japan Industrial Partners (JIP) submitted a bid to buy Toshiba for around $15 billion that lacks key commitments from banks, the Nikkei newspaper said on Monday, raising questions about whether the offer can succeed.

Masayoshi Hirata, Toshiba’s chief financial officer, declined to comment on specifics of the sale process, saying only that it is in an “important phase”.