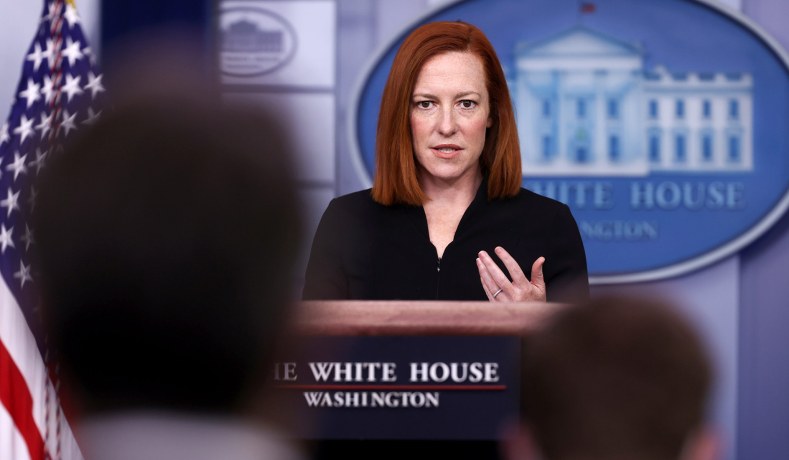 Doocy: On immigration, has the White House considered beefing up border security now that there is video of a three-year-old and a five-year-old being thrown over the wall in New Mexico?

Doocy: There is video now of a three-year-old and a five-year-old-

Psaki: I’ve seen the video and I think any of us who saw the video were incredibly alarmed by the steps of smugglers, ones that we have been quite familiar with, that we have spoke out about our concerns about. As Secretary Mayorkas said, “the inhumane way smugglers abuse children while profiting off parents’ desperation is criminal and morally reprehensible.” The president certainly agrees with that. These kids were, I believe, rescued by individuals who were working at the border.

Doocy: Yes but they still got close enough, as you guys were talking about root causes in the region, for a smuggler to throw them over a wall into the desert and I’m just curious what the White House is doing to stop that from happening.

Psaki: Are you concerned more about the kids’ safety or are you more concerned about kids getting in? Or tell me more about your concern.

Doocy: The kids’ safety is, as you’ve just mentioned, the main concern.

Psaki: Well of course it is. Which is why I’m often surprised by some of the line of questioning here, but I will say that our concern and our focus is on sending a clear message to smuggler- to the region that this is not the time to come. You should not send your kids on this treacherous journey.  That the smugglers are preying on vulnerabilities in these communities, There’s a lot of issues and steps we need to take to address root causes. So of course our concern is for the safety of these kids. These Border Patrol agents who saved these kids deserve our thanks and our gratitude for ensuring their safety.

Inside the White House briefing room, the press secretary took a legitimate question about the Biden administration’s immigration policies and its effects. Then she created a false choice between worrying about those policies and being concerned about their consequences, all but accusing her interlocutor of being indifferent toward those harmed by the administration’s posture. It was an evasive, illogical, and unprofessional display that would have been decried as a de facto attack on the free press just a few months ago under another president.

Worst of all, it makes plain that the president remains clueless as to how to address the crisis he’s created, other than allowing Jen Psaki to embarrass him from a podium.