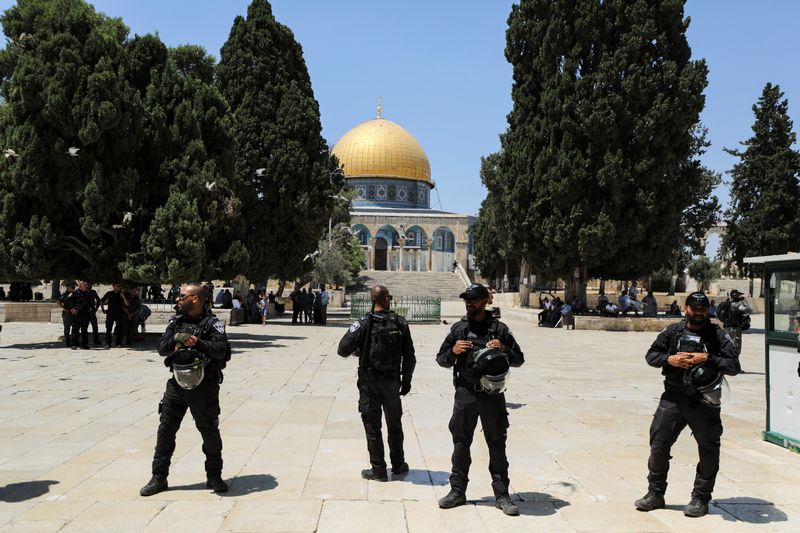 The Dome of the Rock is seen in the background as Israeli security forces guard after brief clashes erupted between Israeli police and Palestinians at al-Aqsa Mosque over visits by Jews on the Tisha B’Av fast day to the compound known to Muslims as Noble Sanctuary and to Jews as Temple Mount, in Jerusalem’s Old City, July 18, 2021. REUTERS/Ammar Awad

JERUSALEM (Reuters) – Brief clashes erupted on Sunday between Israeli police and Palestinians at Al Aqsa mosque over visits by Jews to the compound revered in Judaism as the site of two destroyed Biblical temples.

No serious injuries were reported in what police described as stone throwing early in the day by several Palestinian youngsters who it said were then dispersed.

Palestinian officials said police forcefully evacuated Muslim worshippers to clear the way for Jewish visitors and fired rubber-coated bullets during the confrontation in one of the most sensitive venues in the Arab-Israeli conflict.

All was quiet by the time Muslim noon prayers were held, but the incident drew condemnation by the Palestinian Authority, which administers limited self-rule in the occupied West Bank.

Israeli media reports put the number of Jewish visitors who walked through the Jerusalem plaza at around 1,300.

They were mostly religious Jews, some with children in tow, who toured the site under heavy police guard on the Tisha B’Av fast day marking the razing of the temples.

In a statement, the Palestinian Authority said it held “the Israeli occupation government fully responsible for the escalation resulting from the Israeli incursion in the Al Aqsa mosque complex in occupied Jerusalem”.

The Authority called the Jewish visits provocative and a “serious threat to “security and stability”.

After the spate of violence, Israeli Prime Minister Naftali Bennett directed that Jewish visits there “continue, while maintaining order at the site”, an official statement said.

Israeli police monitor and regulate Jewish visits to the flashpoint plaza, known in Judaism as Temple Mount. Muslims refer to the compound, where Al Aqsa mosque, Islam’s third holiest site, and the Dome of the Rock shrine are located, as the Noble Sanctuary.

The area is in Jerusalem’s walled Old City and part of the territory Israel captured in a 1967 Middle East war. Violence there led in part to an 11-day Israel-Gaza war in May.