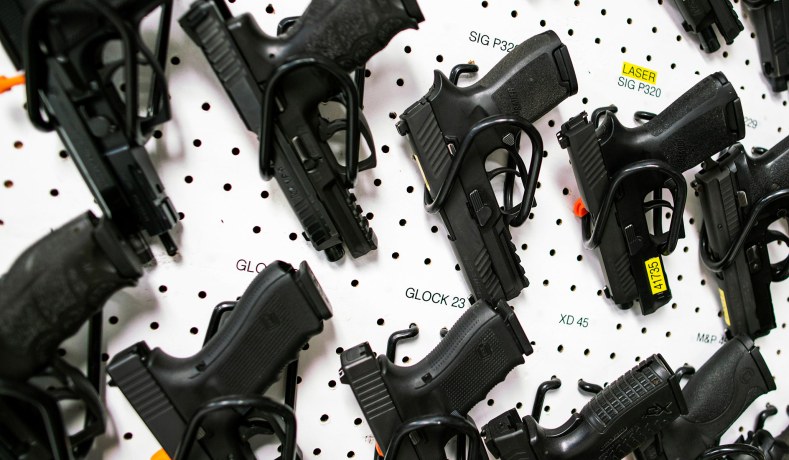 Politifact contends that Joe Biden did not mean to suggest that he would ban all handguns at his town hall on Wednesday:

“The idea you need a weapon that can have the ability to fire 20, 30, 40, 50, 120 shots from that weapon, whether it’s a 9-millimeter pistol or whether it’s a rifle, is ridiculous,” Biden said. “I’m continuing to push to eliminate the sale of those things.”

Those numbers Biden used apply to assault-style firearms and high-capacity magazines. As recently as June, when Biden rolled out his strategy to bring down murders, he said he wants to ban both.

Experts disagree over what is or isn’t an assault weapon. States set different thresholds for what qualifies as a high-capacity magazine.

But regardless of the definition, neither term includes all handguns.

That’s true. But Biden’s plan would include far more handguns than Politifact admits. The piece continues:

For example, the Sig Sauer P365 was ranked the most popular handgun in a 2020 survey of Alabama gun dealers. The NRA’s Shooting Illustrated Magazine named it the Handgun of the Year. The standard magazine for the P365 is 10 rounds, and depending on the model, the weapon can accommodate a 15-round magazine.

Nothing Biden said would curtail the purchase of the Sig Sauer P365. Nor would his policies touch any of the 15 standard handguns in the Alabama survey.

That is simply false. Biden often talks about re-passing the now-expired “assault weapons” ban of 1994, which limited magazines to ten rounds (“we got that done when I was a Senator,” he said earlier this year). Back in 2013, he argued that doing this was more important than banning “assault weapons,” and specifically set ten rounds as his limit: “If you need more than 10 rounds to hunt,” he said, “and some argue they hunt with that many rounds, you shouldn’t be hunting.” Every major gun-control group in America has set ten rounds as the limit, as has Biden’s pick to lead the ATF, David Chipman. Biden may, indeed, not be proposing outlawing every handgun in America. But he’s certainly taking aim at a lot of them.