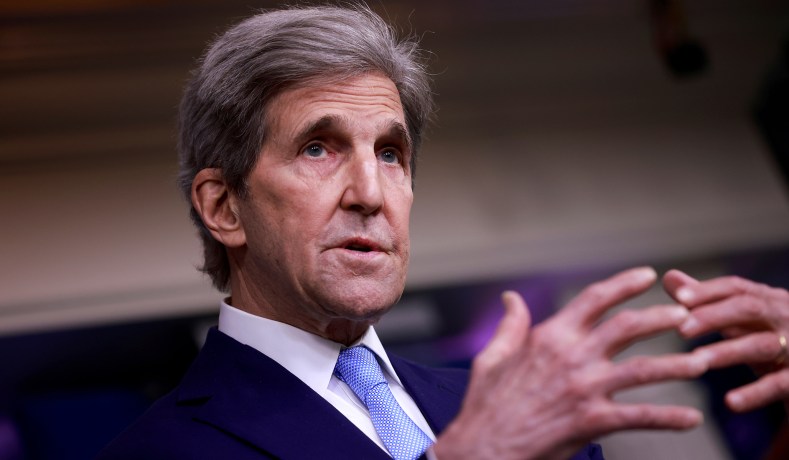 Earlier this week, the New York Times reported on a leaked tape in which Iranian foreign minister Mohammad Javad Zarif is overheard saying that John Kerry had told him Israel launched “at least” 200 Israeli airstrikes against terror regime’s interests in Syria. (And by “reported,” I mean the paper buried a single line deep in its piece.)

The few journalists who bothered following up adopted the State Department’s talking point, claiming that the Israeli strikes had been public knowledge by the time Kerry relayed the information to Iran. On CNN, Secretary of State Antony Blinken said the strikes “were all reported in the press at the time, so it is utter nonsense.”

We don’t know that. It’s likely that the 200 strikes weren’t reported until six months after Kerry last meeting with Zarif — though it’s true, we can’t know with any certitude how many times the former secretary of state met Iranian officials. Not that it mattered, anyway, as Kerry soon denied mentioning the strikes at all.

Since Kerry’s denial, Adam Kredo at the Washington Free Beacon got his hands on the tapes; an independent translation offers some more context. After Zarif says, “Kerry told me that Israel had launched 200 airstrikes against you,” the interviewer specially asks him: “You didn’t know?” “No, no,” Zarif replies.

Now, it’s unknown why Zarif would lie to an ally in an off-the-record conversation about an interaction with his favorite Westerner, but it’s certainly a possibility. It’s Blinken, Kerry, and other Iran Deal proponents who have been taking the Iranian government at its word. And they’ll go right back to trusting Zarif soon enough.

Rest assured, however, that if Mike Pompeo were caught having clandestine meetings with adversarial Sunni terror groups to undermine Biden’s foreign policy, a relentless media would be digging until they go to the bottom of situation. The liberal punditry would be shrieking about Logan Act violations. It would be huge scandal.

The question isn’t whether Kerry would sell an American ally out to the Iranian terror state — everything in his history says he would. The fact is that a former high-ranking member of the opposition party went abroad and met with a violent American adversary, likely discussed the military actions of an ally (known or unknown to the public), and, most important, undercut the official foreign policy of the United States government. The man who did this is now a member of the new administration. And no one in mainstream political media thinks it’s worthy of more scrutiny.