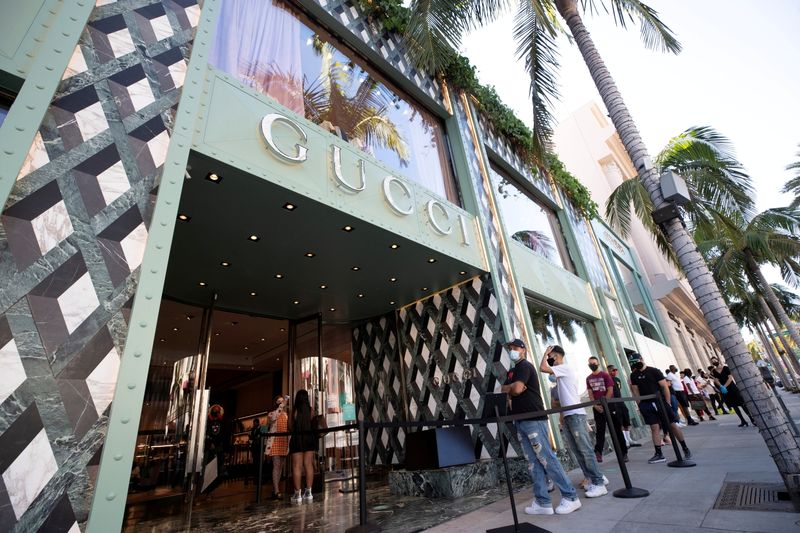 By Silvia Aloisi and Mimosa Spencer

PARIS (Reuters) -Sales at French luxury group Kering nearly doubled in the second quarter as coronavirus curbs were relaxed in much of the world, with its star fashion label Gucci accelerating sharply and hoping to capitalise further on its centenary year.

The luxury goods industry has rebounded strongly since the beginning of the year, fuelled by robust demand in Asia and the United States, with Kering rivals like Louis Vuitton owner LVMH also benefiting.

Kering said on Tuesday overall comparable revenues leapt 95% in the three months to the end of June on a year earlier, and were 11% higher than their pre-pandemic, 2019 levels. Total revenues reached 4.16 billion euros ($4.92 billion).

At its Gucci brand, which accounts for more than half of group revenues and 76% of operating profit, sales leapt 86% year-on-year, picking up pace from the previous quarter.

After cutting marketing spending and fashion shows in 2020, Gucci is catching up on its 100th anniversary, keeping the buzz around the brand high with events and new collections, including one presented in April where Gucci designs were crossed with silhouettes and logos by Balenciaga, another Kering brand.

That collection is likely to hit stores at the end of the third quarter, while the launch of a Gucci-based Ridley Scott film “House of Gucci”, with Lady Gaga, Adam Driver and Al Pacino, is expected to give additional visibility to the brand around the key holiday season later this year.

The rebound has extended beyond blockbuster brands at the luxury conglomerates to lower-tier labels.

LVMH on Monday flagged record profitability and revenue at Fendi, Loewe and Celine, while Kering said that Yves Saint Laurent had reached critical scale with sales bouncing back in all regions and Bottega Veneta revenues hit a record level in the second quarter.

Kering finance chief Jean-Marc Duplaix said the group would continue to invest to support its brands in the second half of the year, at a time when cash-rich luxury goods conglomerates are ploughing funds into marketing and events.

Duplaix said this would not come at the expense of profitability, with margins expected to increase in the second half.

“Demand for our brands remains strong,” he said.

Kering’s free cash flow from operations more than tripled in the first half to a record 2.4 billion euros, giving the group a sizeable cash pile for possible acquisitions.

With recurring market rumours that Kering could be eyeing a tie-up with Swiss rival Richemont among others, Managing Director Jean-Francois Palus said the company was looking for possible M&A deals.

He added the recent purchase of Danish eyewear label Lindberg did not preclude a bigger acquisition, although he noted there was a scarcity of luxury targets.

“We are watching the market, working to find the best target at very good conditions, that’s what we’ve been doing in past years and what we will do in the future.”

Duplaix added Kering was not in the process of selling its watch division after media reports it might look to part ways with labels Girard Perregaux and Ulysse Nardin.