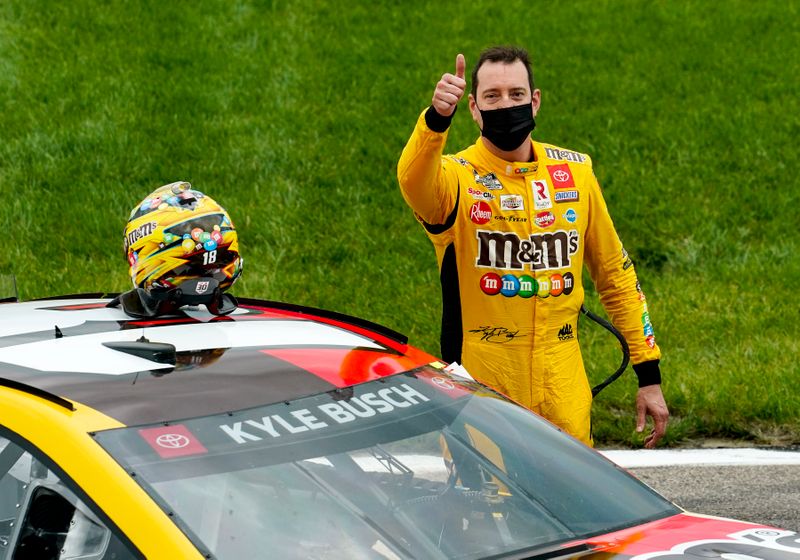 Kyle Busch held off the field after a restart with three laps to go and went on to win the Buschy McBusch Race 400 NASCAR Cup Series race at Kansas Speedway.

The victory came on his 36th birthday and gave him a second win on the weekend, as he also won Saturday’s NASCAR Truck Series event at Kansas.

It gives him a Cup victory for the 17th season in a row.

Busch said it was a rare great day for him, considering how the 2020 season ended and 2021 started.

“You talk about the ups and downs of racing,” the Joe Gibbs Racing driver said, “it’s been a lot of downs for us.”

The tough times of a year ago and then several bad finishes this year caused the two-time Cup champ to wonder if he “could still do it.”

“There’s a sense of doubt there, for sure,” Busch said. “You just got to keep persevering, keep digging and putting your focus forward.”

The win comes in the 11th race of the season while a year ago, Busch didn’t win until the 34th event of the season.

Busch led 20 laps Sunday in getting his second win at the 1.5-mile Kansas oval.

Busch Beer took on the title sponsorship for the race this year and outsourced the event’s official name to fans, who could send in their suggestions in exchange for a $1 donation to charity. Social media users decided the winner.

“I just remembered,” Kyle Busch said. “The Buschy McBusch Race and a Busch won it. What do you know.”

Finishing second was Kevin Harvick of Stewart-Haas Racing, who was also looking for his first win of 2021. The margin of victory was .336 seconds.

Havick said his car “was on and off here today,” Harvick said after getting his best finish of the season. “They did a good job of adjusting it and had the right strategy there at the end to have better tires than everybody else. It got pretty aggressive there at the end and we were able to come up with a good finish.”

Third was Brad Keselowski of Team Penske, who started from the pole and led the first 64 laps and 72 in total.

“We weren’t quite as fast as we wanted to be,” Keselowski, who was also on fresher tires than was Busch and was coming off a win a week ago at Talladega, said. “The Gibbs cars were real fast and Kyle Larson was screaming fast. We were kind of right there on the edge the top five. But we almost stole one there with pitting” for tires.

Kyle Larson appeared to be steaming toward his second victory of the season but a series of late-race cautions and a decision to not pit for tires during those cautions cost him his shot.

The Hendrick Motorsports driver led 132 of the 267 laps and held big leads for much of the final two stages.

He restarted with the lead with 10 laps to go but quickly was dropped back to third, where he restarted after the final caution. He ran into trouble on the final laps and wound up 19th.

Denny Hamlin appeared to have a great shot at depriving Larson of the win when he took the lead on a restart with 32 laps to go. But with 25 to go, he brushed the wall, blew a tire and hit the wall again as his chance to get his first win of the season ended.

The racing moves to Darlington, S.C. next weekend.