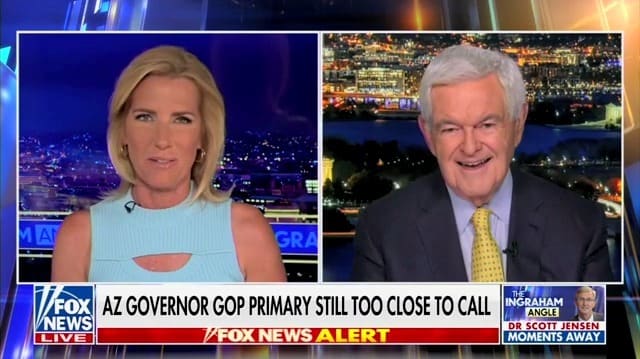 Twenty-four hours after polls closed in the GOP primary for Arizona governor, the race is too close to call, yet Fox News host Laura Ingraham and former House Speaker Newt Gingrich complained Wednesday that the lack of an outcome is “crazy,” “obscene,” “a disgrace,” and “profoundly wrong.”

Kari Lake, former President Donald Trump’s pick for the seat who alleged voter fraud about a week before election day, has a slight lead over Karrin Taylor Robson, former Vice President Mike Pence’s choice, with about 82 percent of votes counted. During her 10 p.m. broadcast, Ingraham said that a new batch of votes in Maricopa County had been reported, with Robson now leading there by less than one percentage point.

“The county says that it can release updated numbers tomorrow around 10 p.m. That’s great for us because our show starts at 10 p.m. eastern,” the Fox host said. “But Newt, I talked about this with [Sean] Hannity. This is obscene that in the greatest country in the world, we can’t count our votes on Election Day and report on election night. What the heck is going on and why is this still not fixed?”