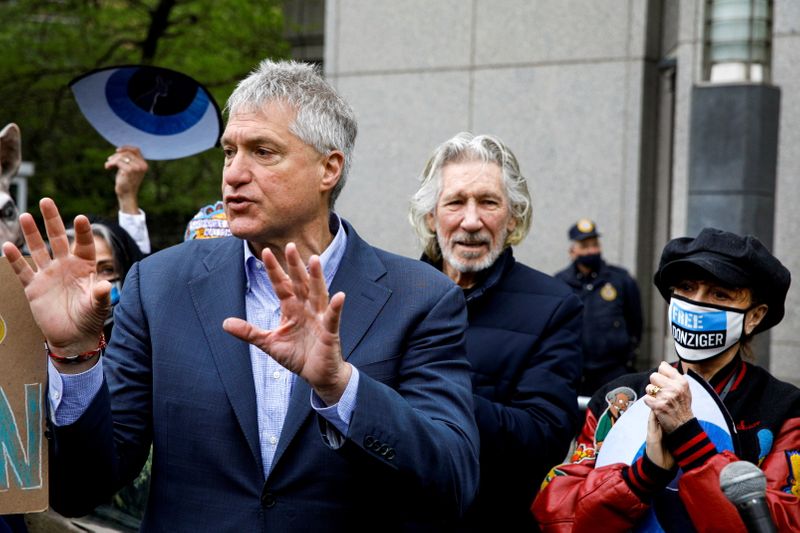 FILE PHOTO: Attorney Steven Donziger, who won a multi-billion dollar judgment against Chevron on behalf of Ecuadorian villagers, speaks to supporters with Singer Roger Waters and actor Susan Sarandon, as he arrives for his criminal contempt trail at the Manhattan Federal Courthouse in the Manhattan borough of New York City, New York, U.S., May 10, 2021. REUTERS/Brendan McDermid/File Photo

U.S. District Judge Loretta Preska in Manhattan ruled that attorney Steven Donziger “repeatedly and willfully” defied court orders, including by failing to turn over his computer, phones and other electronic devices.

“It’s time to pay the piper,” Preska wrote in a 241-page decision, following a five-day trial with no jury in May.

In a statement, Donziger pledged to appeal. He called the decision an “obvious travesty of justice” designed to validate Chevron’s “demonize Donziger” strategy, and renewed his claim that Preska structured the trial to make him “appear guilty.”

Chevron did not respond immediately to requests for comment.

Donziger has said the case violated his constitutional due process rights and that the private lawyers serving as prosecutors for the United States were appointed illegally.

Those lawyers did not immediately respond to a request for comment. Donziger has been confined to his home for nearly two years while defending himself.

The case is the latest twist stemming from Donziger’s representation of villagers in Ecuador’s Lago Agrio region, who sought to hold Chevron liable for water and soil contamination from 1964 and 1992 by Texaco, which Chevron later acquired.

Donziger, a Harvard Law School graduate, won a $9.5 billion judgment against Chevron in an Ecuadorian court in 2011.

But San Ramon, California-based Chevron sued Donziger in federal court in Manhattan later that year, claiming that he and his associates pressured the presiding judge in Ecuador.

Chevron has also said Texaco cleaned up the pollution, and state-owned Petroecuador was mainly responsible for the contamination.

In 2014, U.S. District Judge Lewis Kaplan refused to enforce the $9.5 billion judgment, saying it had been secured through bribery, fraud and extortion.

Chevron later sought to recoup money Donziger personally reaped in the Ecuador case, and Kaplan ordered Donziger to turn over electronic devices to the company’s forensic experts. When he refused, Kaplan charged him with criminal contempt.

In her decision, Preska emphasized that the contempt case focused on Donziger’s conduct, and had nothing to do with Chevron’s responsibility for any pollution in Ecuador.

“Contrary to Mr. Donziger’s assertion that his conviction was ‘pre-ordained,’ the Court finds him guilty on each count for one reason and one reason only: Mr. Donziger did that with which he is charged. Period.”

Lawyers for Donziger have said he could face six months behind bars. Donziger was disbarred by a New York state appeals court last August.

(Reporting by Sebastien Malo;Editing by Joe Bavier and Leslie Adler)