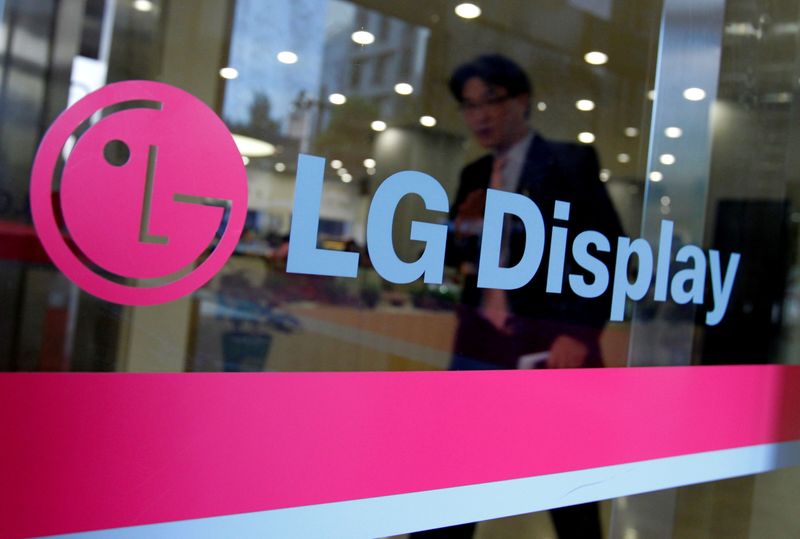 FILE PHOTO: A man walks out of the headquarters of LG Display in Seoul, October 20, 2011. REUTERS/Jo Yong-Hak/File Photo

By Heekyong Yang and Joyce Lee

SEOUL (Reuters) – South Korea’s LG Display Co Ltd on Wednesday posted a better-than-expected second-quarter profit as pandemic-led demand for TVs and laptops drove up panel prices, pushing its shares up as much as 4.2% in morning trade.

Prices of LG Display’s mainstay 55-inch liquid crystal display (LCD) panels for TV sets more than doubled in the April-June quarter from the same period a year earlier, according to market data from TrendForce’s WitsView.

Still, panel prices are slated to fall in the latter half of the year, as Chinese panel makers ramp up production on the back of a slight easing in the shortage of semiconductor parts, especially display driver integrated circuits (DDI), analysts said.

“We are planning to operate our business on the assumption that IT panel prices might be partially mitigated and decline,” Chief Financial Officer Suh Dong-hee told an earnings briefing, citing issues including competitors’ panel production capacity and the parts supply situation.

Market demand for LCD TVs was likely to decline more quickly than for IT devices, which would likely lead to weaker panel prices for LCD TVs, Suh said.

Apple on Tuesday said a global chip shortage that has bit into its ability to sell Macs and iPads will start to affect iPhone production and forecast slowing revenue growth.

Analysts said the global chip supply crunch has pushed up prices of consumer electronic gadgets, including laptops, TVs and smartphones as manufacturers adjust prices to reflect component cost increases in their pricing, however, prices were unlikely to continue to rise as the chip shortage is expected to ease in the second half of the year.

LG Display’s stock has risen more than a fifth so far this year, versus a 12.5% rise in the broader market. The stock was up 2.2% in late morning trade.