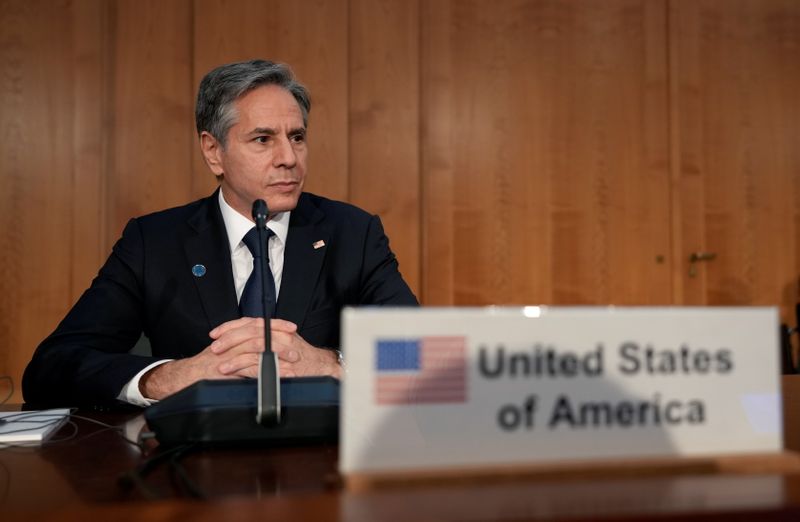 U.S. Secretary of State Antony Blinken attends a video message by Secretary-General of United Nations Antonio Guterres (not pictured) at the beginning of the ‘Second Berlin Conference on Libya’ at the foreign office in Berlin, Germany, June 23, 2021. Michael Sohn/Pool via REUTERS

By Humeyra Pamuk and Angus McDowall

BERLIN (Reuters) -Libya’s foreign minister said on Wednesday international powers had made progress at talks in Berlin on the removal of foreign fighters from the country, although a final communique from the U.N.-backed conference specified no concrete new measures.

Libya has had little stability since a 2011 NATO-backed uprising against then head of state Muammar Gaddafi, but a U.N.-led peace process brought a ceasefire last summer after fighting between rival factions paused and then a unity government.

Wednesday’s meeting in Berlin aimed to make progress on removing mercenaries and other foreign forces from Libya, months after the ceasefire called for their withdrawal, as well as on steps towards securing a December election.

“Hopefully within coming days mercenaries (on) both sides will be withdrawn,” Libya’s Foreign Minister Najla Mangoush told a news conference following the talks, without giving details.

A senior official at the U.S. State Department said Turkey and Russia, which back opposing sides in Libya, had reached an initial understanding to work towards a target of pulling out 300 Syrian mercenaries from each side of the conflict.

German Foreign Minister Heiko Maas also said he believed there was an understanding between Russia and Turkey on a step-by-step withdrawal of their fighters. “This will not mean that everybody will take their mercenaries back overnight,” he said.

Reuters could not immediately reach Turkish and Russian officials at the talks, which were also attended by U.S. Secretary of State Antony Blinken, for comment.

A frontline solidified around the coastal city of Sirte and a formal ceasefire was agreed in October. In November, the participants in a U.N. peace dialogue set a date for elections and agreed to create a new interim government.

Addressing the Berlin meeting, Libyan Prime Minister Abdulhamid Dbeibeh, who was appointed in March, called on Libya’s parliament to approve an election law to allow the December election to go ahead and to pass his government’s budget.

“Unfortunately, we have not yet seen the necessary seriousness from the legislative bodies,” he said.

Although Libya has made swift progress in addressing a crisis that threatened to escalate into a full-scale regional conflict, major risks persist with myriad armed groups holding power on the ground.

Haftar was backed by the United Arab Emirates, Russia and Egypt in his Tripoli offensive. The internationally-recognised Tripoli government was supported by Turkey, which ultimately helped it repel the assault.

Despite the failure of his offensive, Haftar remains powerful and last week deployed his Libyan National Army (LNA) in the south, declaring the closure of the border with Algeria.

The two sides’ October ceasefire called for the withdrawal of all foreign mercenaries by January. However, they remained in place and both sides argue over which group should leave first.

The LNA is supported by mercenaries brought by Russia’s Wagner company, as well as from Sudan, Chad and Syria, U.N. bodies have said.

The former Tripoli government had support from Turkish regular forces in Libya as advisers, and from allied Syrian fighters, the Turkish government has said.

Ankara has said that as its forces were invited by the internationally recognised government they should not be put in the same category as other foreign forces in Libya.

A second State Department official said it was unrealistic to think a full withdrawal of foreign fighters from Libya would come overnight and that it would be a phased approach.

“Getting at what we think is one of the key de-stabilising elements, the presence of these foreign fighters, Syrians, Chadians, Sudanese, that is an important first step and it’s not something we had before,” the official said.

(Reporting by Humeyra Pamuk in Berlin and Angus McDowall in Tunis; Additional reporting by Joseph Nasr and Andreas Rinke in Berlin, Ahmed Elumami in Tripoli, John Irish in Paris and Tuvan Gumrukcu in Ankara; Editing by William Maclean and Nick Tattersall)