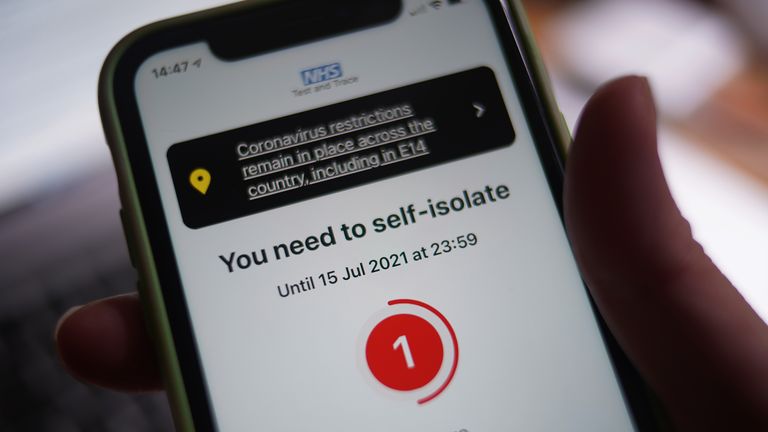 The government has released a list of 16 sectors where fully vaccinated workers may be exempt from isolation if they are told to quarantine after coming into close contact with a positive COVID case.

Those covered will be able to leave their COVID-19 isolation to travel to work and do their jobs after a negative daily test but must remain at home otherwise and go straight into quarantine if they receive a positive result.

It will only apply to workers who are fully vaccinated and 14-days post their second coronavirus jab.

The government had said they would publish a list of critical jobs that would be exempt – but there is so far nothing more specific than the sectors named above.

The exemptions will only be open to a “limited number of named workers” in critical services and are only intended to run until 16 August.

This is when a wider relaxation for fully vaccinated contacts is set to take effect.

Workers have also been warned that they will only be exempt if their employer has received a letter from the government on which their name is listed.

The government said “this is not a blanket exemption for all workers in a sector” and the guidance published on Thursday evening stressed the process “will not cover all or in most cases even the majority of workers in critical sectors”.

It added that those identified as close contacts of a positive case of the virus should only go to work if their absence would lead to the “loss or compromise” of “critical elements of national infrastructure”.

If employers believe the absence of their staff would have this impact they are advised to contact the relevant government department.

Business and industry figures have been calling for exemptions to be set out, amid warnings that staff shortages caused by the so-called ‘pingdemic’ are having a knock-on effect in a number of sectors such as the NHS, police and supermarkets.

Any business which believes its workers should be exempt are asked to contact the relevant governmental department.

The government confirmed on Monday that there would be exemptions for “critical workers” and said railway signallers and air traffic controllers would be included.

Newly appointed Health Secretary Sajid Javid said: “Throughout this global pandemic, critical workers across the country have been doing the extraordinary by delivering vital services – from policing the streets to keeping our transport links open.

Business Secretary Kwasi Kwarteng said the government is ‘very concerned’ about the ‘pingdemic’ situation, but the list of exempt workers will be ‘quite narrow’.

“These individuals form the backbone of many of our most vital services and, as we learn to live with this virus, its right we do everything in our power to protect services from disruption by allowing our fully vaccinated critical workers to keep doing their important work.”

The Department of Health and Social Care described the move as “a small and targeted intervention to ensure that services critical to the safety and functioning of our society can continue”.

But there has been confusion which sectors were to be included in the scheme, and how a worker would know they no longer have to quarantine if they are a close contact of a positive case.

Earlier on Thursday, Business Secretary Kwasi Kwarteng admitted the government is “very concerned” about the numbers of people being pinged by the NHS app.

His comments come as retailers warn they are under “increasing pressure” to keep shelves fully stocked amid staff shortages caused by the “pingdemic”.

Speaking to Kay Burley on Sky News, Mr Kwarteng said ministers were “monitoring” the situation and would be setting out a list of exempt critical workers “very soon”.

“The list of exemptions will be quite narrow because, obviously, you have to draw the line somewhere,” Mr Kwarteng said.

The expectation was that this list would be published on Thursday.

But Downing Street did say earlier this week that it would not be “producing a list covering individual sectors”, with employers instead having to apply to government departments to allow workers to effectively circumvent the COVID-19 rules around isolation.