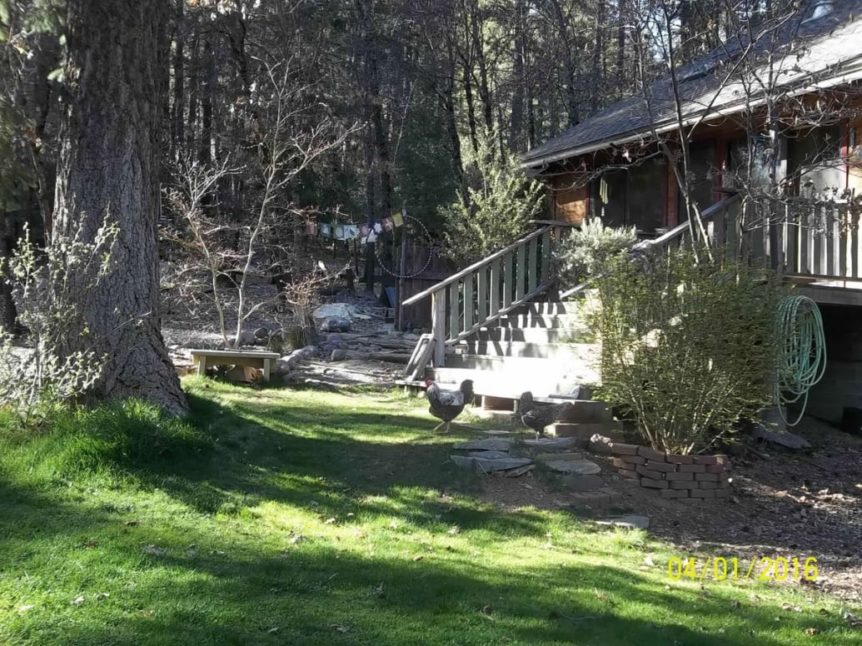 Wade Linford still remembers the days in the mid-2000s when he built his home from scratch.

The 40-year-old building contractor can smell the sawdust from when his brother, Auston, and father, Keith, milled the trees and seasoned the wood. Neighbors in his tiny community of Indian Falls, California, also helped craft the two-story structure, beam by beam.

“We toiled over that house,” Wade told The Daily Beast. “Every board was cut out of the forest, sanded, and oiled.”

It was a place abutting Plumas National Forest where family gathered, a son was born, and dogs and loved ones were buried. They grew their own vegetables, raised animals, kept bees, and lived off the land.

Then came the Dixie megafire that descended on Indian Falls this past weekend, the latest nightmare in a parade of climate change-fueled infernos. According to Wade, the flames destroyed his house and almost three-dozen other structures, but miraculously spared his brother Auston’s place next-door.

“The time I’ve spent there, I wouldn’t trade it for the world,” Wade said.

Under mandatory-evacuation orders last week, Wade recalled, he, his wife Jessica, and their two teenage sons paid their final farewell as the flames closed in.

“We stood there and said thank you and goodbye,” he said, “and left an altar of incense cedar and sage that came off the land.”

Just 200 yards away, Auston grabbed the dirt and said a silent prayer at their childhood home—this house one the brothers helped their dad build in the 1980s, when they were kids, and where Auston’s family had returned about three years ago. “I knew I would never see it the way it was again,” Auston told The Daily Beast. “As I drove out, I took one last picture of our old community garden, a picture of our corner there, of our street.”

On Monday, the siblings received the bittersweet news: the family home had somehow made it, but Wade’s was lost.

Wade said he first recognized parts of his burned-down home in YouTube footage of the wreckage; the tell-tale signs were his arched gates, landscaping, and custom foundation. “I felt it in my stomach before I was able to zoom in that it was my place,” he said.

“The houses are one thing, but the trees and the land is what we live up here for,” Wade said. “Homes can be rebuilt, but these trees and the creeks and the fish, they can’t be. We’ve lived in this community forever and I was hoping to pass this down to my kids.”

Wade said he’s relieved no one in his community was hurt in the inferno—and that his wooden home was “back with the earth again.”

He and Jessica, and their two sons, Finn, 13, and Marley, 16, are now waiting from a relative’s home outside of Quincy for word on when they can return to what’s left. Wade was hoping for a ride-along with the sheriff, once it’s safe to see the damage. (Friends have made two fundraisers for the Linford families, one on Facebook and another on GoFundMe.)

The Linfords were quick to note that the devastation wasn’t exactly unexpected: Indian Falls wasn’t far from the 2012 Chips fire, nor the 2018 Camp Fire, the deadliest in state history, nor last year’s North Complex inferno.

“Everybody around here kind of knows that we’re living on the edge, and the reason we live up here is for the forest and creeks and trees. That’s the hard part. We know it’s all ready to burn, so much of it is overgrown,” Wade said, adding, “There’s no amount of thinning you can do on your own property to stop it.”

Small towns nearby have also been bracing for or facing the worst, including Taylorsville, where another pair of brothers, Cody and Clancy Pearce, and their neighbor volunteers were frantically hosing down properties in an attempt to prevent huge losses.

The largest wildfire raging in the state, Dixie, has burned well over 200,000 acres. The so-called megafire merged with another large blaze, the Fly Fire, in recent days, and was only 23 percent contained as of Tuesday afternoon, according to CalFire.

Fire officials fear hotter temperatures and higher winds later this week may only worsen the 325-square-mile blaze, which threatens to tear through thousands more structures in Butte and Plumas counties, putting lives in danger. This after thick plumes of smoke gave firefighters a bit of a reprieve on Monday by cooling temperatures and shading the flames.

Freelance fire photographer Josh Edelson, who has documented the state’s wildfires for 10 years, spent four days shooting the blazes in Greenville, Lake Almanor, and Twain, where he said at least one resident refused to leave his flock of animals.

When he got to Indian Falls, Edelson said, the flames were so high he couldn’t photograph them with a wide-angle lens. “That was probably one of the more intense fire scenes I’ve ever been in,” he told The Daily Beast, adding that the blaze was crowning in trees 150-feet-high. Below, firefighters doused propane tanks next to empty homes.

Edelson said the firefighters warned him some of the power lines in the area were still active.

“Before the fire came into that community, it was ripping up the canyon so fierce, all firefighters pulled out of the area because it was incredibly dangerous,” Edelson said. “There was no one in there when the fire ripped through. As soon as I got there, half the houses in the community were already on fire and spreading quickly from house to house. The firefighters did the best they could, but it was like going to war with a peashooter.”

Nearby, Tesla and Jarred Barabino said they lost their Indian Falls rental home, which they evacuated early on July 16.

Tesla told The Daily Beast she was terrified of encountering a deadly blaze similar to the Camp Fire that devastated the town of Paradise, and cost her husband’s grandmother her own home.

The Barabinos moved to Indian Falls during COVID, and Tesla, 26, had just enrolled at nearby Feather River College. “It was an amazing place to live, and I really wanted to raise our daughters there,” Tesla said.

The day before they fled, the couple celebrated the birthday of their 1-year-old twin daughters Willow and Nellie. It was the first big party in the young family’s first real home, where they watched blue jays and hummingbirds eat in the backyard and where neighborhood dogs would romp before visiting the next house.

“We have video of them opening their presents,” Tesla said. “We had the party just us, as a family, then the next day we left.”

But with the high temperatures and power going in and out, the couple packed their bags, thinking they’d be gone for just a few days. “It was heartbreaking,” Jarred, 28, said. “We wanted to get our girls out of there as fast as possible. We didn’t think we’d wake up to our house being burnt down.”

On Sunday, while scrolling through Twitter for fire updates, Tesla said she spotted new photos of homes in her neighborhood engulfed in flames. Jarred noticed a brick house with double garage doors and two burned out cars; it was their new home, he told The Daily Beast.

As they wait out the fires with family a couple hours southeast in Nevada County, the couple say they are thankful to be alive and grateful for the firefighters battling the flames. Jarred’s mother, Sue, created a GoFundMe page to help pick up the pieces.

“It’s not about the things, the stuff, the party,” Tesla said of their Indian Falls home. “That was the first place we really all felt we were a family. That we felt was home to us.”

In addition to the trouble Wade’s family has been facing, the Linford brothers still have their parents to worry about: They, too, evacuated their home eight days ago, with the family fearing their house could be destroyed by the fire.

Auston urged officials in California to do more to prevent massive wildfires worsened by the climate crisis.

“The danger we’ve created by mismanaging forests, over-logging them, and not going in and making them safe for the people who live around them in this time of climate change, that needs to be brought to people’s attention,” Auston said. “Because nothing is going to change, this is going to happen every year, more and more, until we start coming up with a solution before it happens.”