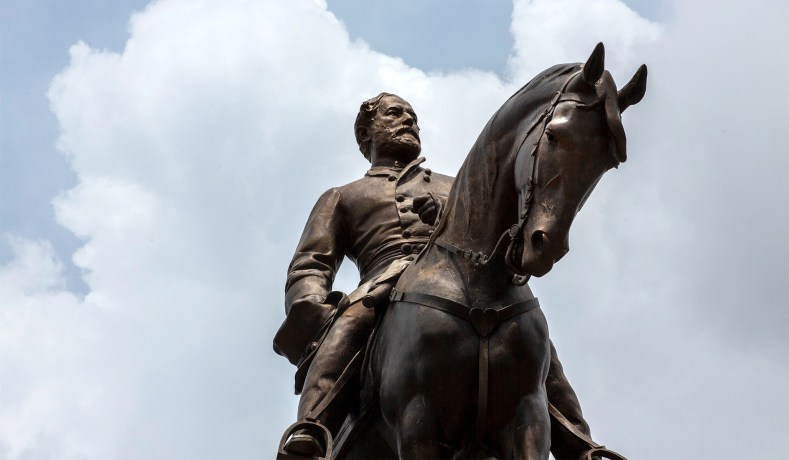 Catesby Leigh, writing on NRO, asks whether “Richmond’s Robert E. Lee statue is next,” i.e., next to be removed from the city’s Monument Avenue. (Statues of Stonewall Jackson, J. E. B. Stuart, and Jefferson Davis are already gone.) Leigh’s essay merits consideration. But I do hope the Lee statue is next.

I side with those who think there is a clear and important distinction between the Founders and the defenders of the Union, on one hand, and the Confederates on the other: The Confederacy was philosophically devoted to racial slavery, while the United States was philosophically irreconcilable with it. Or to speak less abstractly, the founders of the Confederacy inherited an evil practice, wished to perpetuate it indefinitely, and rebelled against the United States to achieve that purpose; the founders of the United States (or those we typically honor) inherited an evil practice, looked forward to its end, and expressly committed the nation to principles (as in the Declaration of Independence) that brought its end about. Removal of monuments to Confederates should not be seen as an “indulgence” of “the BLM­-Antifa statuary rampage,” since it was already right to remove them before the rampage started. I won’t belabor these points, which are by now familiar. I will instead recommend Philip A. Klein’s and Cameron Hilditch’s more extensive thoughts.

You might reply that the statue-vandalizers didn’t care about all that and were often just as inclined to damage statutes of Washington or Jefferson, Lincoln or Grant: “Take your distinctions to the seminar room, Steorts, but here in the real world we have some statues to save.” I want to plot this attitude somewhere on a grid with axes labeled “cynicism” and “despair.” Not only is it dangerous (once you start compromising your principles in order to stop your opponent, there’s no telling where it will end) and enervating (involving as it does a certain faithlessness in your own cause). It’s also foolish. If you believe in historical truth and moral objectivity, and believe in our capacity (however imperfect) to grasp them, then you ought to have greater confidence that they will prevail than that errors will. Setbacks will happen, but by siding with what’s true and good you align yourself with what is, in one sense or another, real. Because it’s real, it’s the better bet. The alternative leaves you betting on no more than your subjective Machiavellian calculation of a flux of relativities.

Two further issues have not, I think, received the consideration they deserve.

The first is the relation between the virtues that these Lost Cause monuments are said to honor and the ends for which those virtues were practiced.

Most people who want to preserve the monuments are not, we should assume, personally racist. Rather, they see themselves as honoring the “personal honor, courage, and self-sacrifice” (Leigh’s words) of Confederate soldiers and leaders. Sometimes you also encounter “loyalty” on such lists. The defenders want, in other words, to draw a line between those virtues and the evil of slavery, so that the virtues have an intrinsic positive value that’s independent of the evil of the cause.

Either way, the whole framework is wrong. Loyalty, courage, etc. have no value that is independent of the ends they serve. Their value is instrumental. They are necessity, but what’s necessary is that they be practiced for the sake of the good.* If your loyalty leads you to betray and make war against your country, it has gone bad — it is (provided that your country is good) doing damage and is not, as you are expressing it, good in any sense. If your courage is spent killing people so that slavery will endure, it’s a terrible use of the virtue, one to be condemned rather than emulated.**

The second point that I think gets neglected is that public memorials are a kind of public education. They instill values and present models to look up to. They are not just works of art or representations of history; they have a moral purpose. And the hard truth about these Lost Cause monuments is that, based on a defective sort of reasoning that separates virtues from ends, they miseducate the public about civil virtue. Leigh asks why the feelings of those who want the monuments preserved do not count. But it’s not about feelings. It’s about the reality that the public deeds of these men in their capacity as Confederate leaders were in no sense good, and should not be presented as if they were. “Iconoclasm” isn’t iconoclasm when the alleged icons never should have been icons in the first place. Our racial politics remain disordered in part because, more than a century and a half after the Civil War, too much of the country cannot see that.†

Now would be an especially good time for the Right to see it, given present arguments over critical race theory or the popular bastardizations of it. How can one coherently say, in effect, “We believe so strongly in color blindness and racial equality that we wish to prevent public-school instruction that departs from those ideals or might lead to such departures; but by all means, let’s go on lauding these honorable, courageous, self-sacrificing soldiers for white supremacy and race slavery”? The tension is unbearable.‡ Why wouldn’t a black American looking at Lee in Richmond think that certain default settings of our culture and politics are subtly tolerant of racism?

Or to improve the question, why wouldn’t an American?

*Cf. Plato’s idea that the spirited part of the soul must serve the reasoning part. Carson Holloway’s misjudgment of Trump consisted, as I see it, in an overconfidence that this relationship would obtain. Trump’s thumos turned out to be unreasonably self-interested, and thereby destructive.

**I realize that the case of Lee is complicated by the fact that, despite owning slaves, he thought slavery was bad and urged Jefferson Davis to emancipate slaves so that they could join the fight against the Union. All the same, he was willing to serve, and to kill for, what had been conceived as a nation devoted to the perpetuation of slavery. We don’t have to oversimplify the man into a devil to see that in the Civil War he practiced his virtues badly. And that bad practice is just what these monuments ask us to remember him for — it’s not like the Richmond statue shows him in his civvies.

†I have no objection to carting these statutes off to a museum that doesn’t romanticize Confederate history, much as I don’t object to portraits of tyrannical monarchs and emperors in art museums. Stone Mountain presents a harder case. Rather than give it the Bamiyan Buddha treatment, I’d rework the accompanying texts and visitor facilities so that they present the monument as a spectacular display of human folly and the ever-present danger of calling good that which isn’t. In theory I suppose we could do the same with Lee in Richmond, but why, when we can instead remove the statue without destroying it? Its defenders will be upset either way.

‡It would also be good for the Right to have an open mind about arguments — whether based on quantitative evidence (see, e.g., “Why Black Homeownership Lags Badly in Minnesota,” by Rachel Bachman and Douglas Belkin) or on personal testimony (“Nina Simone’s Face,” by Ta-Nehisi Coates) — that historical racism and present-day cultural defaults continue to have harmful effects. On the other hand, the Left should see that it does not automatically follow from the existence of such harms that we must retreat from color blindness and the allocation of opportunities according to individual merit; or that all socially significant inequalities are due, in whole or in part, to injustice; or that a special duty to correct the consequences of historical injustices — a duty over and apart, that is, from whatever general duty of assistance we feel toward fellow citizens whose misfortunes are not due to their choices — transfers from generation to generation. That takes some showing.